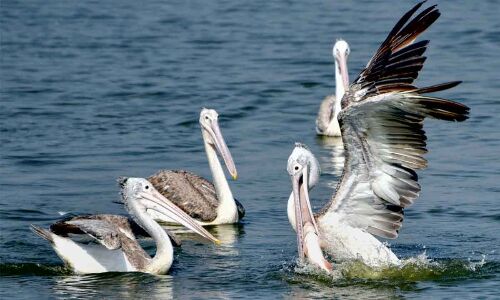 Eluru: Most part of the Kolleru lake in the state is already abuzz with lakhs of migratory birds and the number is only expected to go north and touch a million, with more winged visitors all set to make the Ramsar site their winterstay.

According to forest department officials, glossy ibis, open billed stork, purple moorhen and painted stork are flocking here for the nestling season, many flying from as far as Siberia in Russia, known for their harsh winter.

Many more winged visitors are expected to make their way here in Kolleru in the coming weeks escaping the cold and blizzards in their homelands. It is a natural phenomenon that these migratory birds fly down to this place during winters for nesting and breeding after a voyage of thousands of kilometre.

They land here from places as far as Russia and some of the cold countries of Europe. Kolleru is the largest freshwater lake in the country, located between the deltas of Krishna and Godavari rivers. Abundant food in the form of fish and suitable climatic conditions for breeding are some of the reasons attributed for the avian members making this lake their home during winters, they said.

“We have already received about six lakh birds. This number may go up to 10 lakh in the coming days. Constant efforts by the government to sensitise local people on the importance of migratory birds for ecological balance and keeping a strict vigil on poachers are now paying dividends,” S V K Kumar, forest range officer (wildlife), Eluru told PTI.

According to him, poachers used to kill the birds for a living. However, stringent punishment has resulted in poaching coming down significantly. The birds use facilities created by the state forest department such as habitat centres, trees planted on artificially made mud mounds and iron stands, Kumar said. With the birds arriving in Kolleru, tourism activity also increased as several people come to the lake to watch the fowls.

The lake has been declared as a wildlife sanctuary. After breeding is done successfully and the summer sets in, the birds fly back to their respective places. Kolleru being one of the main hotspots for a migratory route called Central Asian Flyway and also the strategic location which made it a bio-central hotspot for the migratory birds, the lake is considered more important in terms of ecological balance, a senior official of the state forest department said.

Kolleru lake also figures in Ramsar sites. The Ramsar Convention is an international treaty for the conservation and sustainable use of wetlands. It was signed in 1971 in the Iranian city of Ramsar. (PTI)