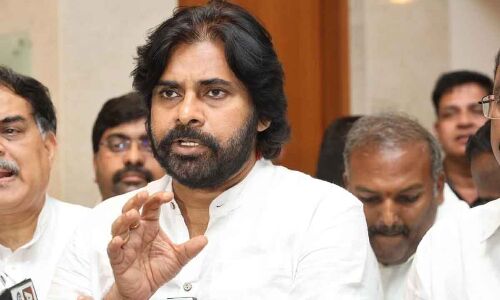 Visakhapatnam: Will the port city become the venue for new political churning? This speculation is high in political circles as Prime Minister Narendra Modi and Jana Sena leader Pawan Kalyan held talks for twenty minutes during his stay in Visakhapatnam.

“Prime Minister has expressed his aspiration to see the progress of the state. I have enlightened the Prime Minister about the affairs of the state as far as I am aware of them. The PM took stock of the state’s scenario and gave a patient hearing,” Pawan Kalyan told the media later. He said he was hopeful that good days were in store for the state. He said he had conveyed whatever he wanted to Modi. He refused to elaborate further on it.

The JSP chief expressed happiness over his meeting with the PM in INS Chola in Visakhapatnam on Friday after eight years. He said that more details of his meeting with the PM would soon be revealed. It is understood that Pawan had submitted a detailed five-page note listing out certain important issues pertaining to various policies of the state government and its alleged anti-people policies, the problems being faced by different sections of society, illegal cases foisted on the Opposition, the recent demolition of houses at Ippatam, etc. Modi chose to meet Pawan before the core committee meeting with state leaders.

Pawan was unhappy with the way the state unit of the BJP has been ignoring him though they continue to claim that he was their ally. This had led to Pawan moving closer to the TDP something which the state leaders are unable to digest. Some BJP leaders for a long time were silent on the issue of Amaravati. They started supporting Amaravati as state capital only after Union Home Minister Amit Shah pulled them up during a meeting in Tirupati.

On the other hand, Pawan Kalyan has been advocating that measures should be taken to ensure that the Opposition votes do not get split.

Pawan is learnt to have listed out several issues, including how the YSRCP leaders use foul language and drag family members into politics and make all kinds of comments which amounts to character assassination.

Sources said if Modi gets convinced for some kind of agreement for united fight, then it would be no looking back for the opposition and they would go aggressive till next elections. In case if BJP or Modi expresses any reservations, Jana Sena will review the situation and may decide to go with TDP to prevent split in Opposition votes.

Gray ‘Official’ badges back for some brands

PM National Apprenticeship Mela to be held in 197 districts