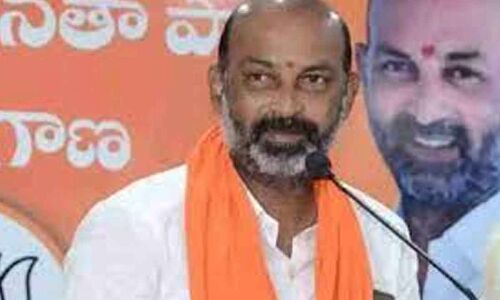 Hyderabad: Aiming to keep TRS government on toes, Telangana State BJP president Bandi Sanjay Kumar is all set to launch the fourth phase of his Praja Sangrama Yatra from next week.

Sanjay will begin the padayatra from Quthbullapur near Hyderabad on September 12. The walkathon will end at Pedda Amberpet, Ibrahimpatnam, on September 22.

The 10-day padayatra will see him move around nine Assembly constituencies to an extent of 115.3 km around the State capital. According to the schedule announced by the party, he will take a break on September 17 to participate in the Telangana Liberation Day public meeting at Parade Grounds in Secunderabad, which is scheduled to be addressed by Union Home Minister Amit Shah.

Sanjay, who is also a member of Parliament, will cover Quthbullapur, Serilingampally, Kukatpally, Secunderabad Cantonment, Malkajgiri, Medchal, Uppal and LB Nagar constituencies during the fourth phase.

The third phase of the padayatra had concluded at Hanamkonda on September 27 and the public meeting to mark the occasion was addressed by BJP national president JP Nadda.

The third phase saw tension and clashes between TRS and BJP supporters at few places visited by the BJP leader. He was arrested in Jangaon district on August 23 when he was trying to sit on a protest over the arrest of party workers during a sit-in near the residence of TRS MLC K Kavitha in Hyderabad.

The police had shifted Sanjay to Karimnagar, where he was kept under house arrest. The police in Jangaon district had asked the BJP leader to stop his padayatra as there was no permission granted for the same and there was apprehension of breach of peace.

Police had stated in the notice that in the name of padayatra the BJP leaders were making provocative statements.

However, the BJP moved the Telangana High Court, which allowed it to continue the padayatra and also to hold public meeting which was also denied by the police.

In the third phase of the padayatra, launched on August 2, Sanjay covered 325 kms in five districts including Yadadri-Bhuvanagiri, Nalgonda, Jangaon, Hanamkonda and Warangal.

Sanjay had launched the padayatra in August last year as a public outreach programme to highlight what he calls the failures of TRS government and what BJP would do if voted to power in the elections scheduled next year.

He started the first phase of the yatra from Bhagya Lakshmi temple at the Charminar. He covered 438 kilometres in 36 days and addressed 35 public meetings. In the second phase, he covered 380 kilometres.

Sanjay completed the second phase of the yatra that had started from Jogulamba Shakti Peetam temple in Alampur, Gadwal on April 14.

On May 13, Union Home Minister Amit Shah had addressed the concluding meeting of the second phase at Tukkuguda near Hyderabad.

BJP leaders said following good public response to the padyatra, Sanjay decided to launch the third phase from next week. Like in the previous phases, national leaders of the party and central ministers will address the public meetings.

Sanjay plans to cover all Assembly constituencies before the Assembly elections. After winning two Assembly by-elections during the last two years, the saffron party is projecting itself as the viable alternative to TRS. The BJP leaders see a realistic chance of coming to power in the state.

Petrol and diesel prices today in Hyderabad, Delhi, Chennai and Mumbai on 05 September 2022

Queen Elizabeth II Died At The Age Of 96