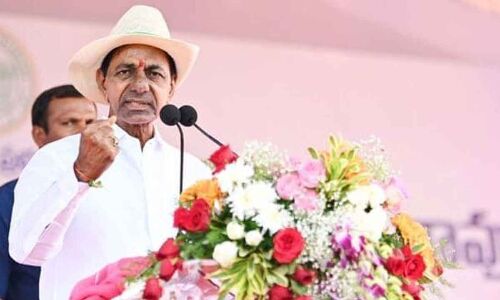 On 14 December, 2022, National President, Bharath Rashtra Samithi (BRS) and Chief Minister Telangana K Chandrashekar Rao formally initiated steps to make the presence of BRS felt in the National Capital New Delhi, by inaugurating the office headquarters at 5 Sardar Patel Marg in the presence of an elite gathering. And thus, anew chapter in India’s political history has begun.Earlier, CM KCR accompanied by his wife Smt Sobharani participated in the RajasyamalaYagamPoornahutiperformed in the premises and received blessings from Vedic scholars. Thus, KCR the statesman politician brilliantly showcased BRS in the National Capital.A sensation in National Politics and that too in KCR style!

Tracing back the genesis of BRS, the first major happening that took place was on March 3, 2018, when Chief Minister KCRfor the first time advocated the need of a qualitative change in the country’s political and governance scenario. A year later sharing his thoughts in the form of National Concerns with the Chairman of the 15th Finance Commission, KCR spelt out the likely philosophy of his national political plans. This thought process ultimately culminated in formation of BRS and formally making its presence felt in Delhi. Now the rest is future. Consequently, in February this year, KCR gave a call for ‘Bangaru Bharat’ on the lines of ‘Bangaru Telangana,’that has been successfully achieved and has articulated the need for a quantum jump in the country’s political landscape, which has been in a rut for the past 75 years. He hinted on several occasions, that, he himself would be leading the emerging alternative. His anguish towards the BJP-led Centre for undermining every institution, the powers of States and the very basic fabric of cooperative federalism became focal points in his series of speeches.

The Telangana Rashtra Samithi (TRS) the earlier name of BRS for over two decades has been progressively marching ahead with a characteristic success, probably unique to it alone and in the process registered two successive remarkable victories in the state Assembly elections and gearing itself for the third consecutive one in the state which will be a hattrick. This apart, with the formation of Bharat Rashtra Samithi, there is likely to be a surprise in the national political scenario, and for the first-time,possibilities of a South Indian based national political party led by KCR grabbing power at the Center as and when general elections are held.

As a leader, as a statesman, as a politician, as a designer of development and welfare schemes, as a visionary, as a pragmatist and as an intellectual, KCR who won the hearts of people of Telangana at large is slowly and steadily moving towards filling the gap for right leadership in the country which in the present circumstancesis highly indispensable. This would enable the people at large in the country to benefit through umpteen welfare and development schemes that are being implemented in Telangana as part of unique ‘Telangana Model’. In tune with this and as people expected, in addition to raising his voice on several occasions, once addressing the TRS plenary on April 27, 2022 in Hyderabad, in his capacity as Party President, CM KCR articulated the need for an ‘alternative development agenda’ for the country which is in line with KCR’s plans to play a decisive and critical role in national politics.When TRS was launched twenty-two years ago, despite many aired their doubts,KCR marched ahead and after 14 years of Gandhian way relentless struggle achieved the Telangana State. With this success behind him, KCR has shouldered the responsibility of playing a significant role in national politics. KCR strongly feels that there is a big gap in the country leadership, and many a times cited examples about the malfunctioning of government at the center including lacking wisdom in international diplomacy.

For instance, on June 2, 2022 on the occasion of Telangana State Formation Day,in his address KCR mentioned about the series of injustices inflicted on states by the center and highlighted the necessity of an alternate national agenda to build the incredible India in the days to come. He said that, though matured democracies have increased public empowerment by decentralizing powers and strengthening civil society participation, in India,the same has not taken place in the true spirit of cooperative federalism. KCR while assuring the people of Telangana, as his bounden duty to protect them and state till his last breath, said that it is also equally his duty to fight against the politics of hatred to protect the interests of the country.

While supporting the candidature of Yashwant Sinha for Rashtrapathi Post, KCR pointed out how Modi government has been bulldozing every institution, basic rights of democracy, the secular fabric of the nation, ruthlessly, arrogantly and unethically trying to silence the opposition, immorally and illegally toppling the democratically elected state governments, inability to face the aggression of the external enemies and becoming an agent of a few crony capitalists and so on. KCR in his two and a half hours’ media conference on July 10, 2022 in Pragathi Bhavan, Hyderabad, labeled Modi as the most inefficient PM in Independent India. KCR said that the one and only Raj Dharma Modi and his BJP government at the center know is destabilizing and then dislodging the duly-elected opposition party headed state governments by dishonesty. He hinted that the present dispensation at the Centre shall not be allowed. Reiterating and reinforcing his active entry into national politics to bring in a qualitative change, Telangana Chief Minister K Chandrashekhar Rao at a public meeting held in Peddapally on 29 August, asserted formation of a farmers’ government at the Centre after the 2024 Lok Sabha elections, which he later coined as the slogan’Ab ki Baar, Kisan Sarkar’. For the first time, KCR also gave an unequivocal call for ‘BJP-Mukt Bharat’ to protect the country from the harmful divisive forces. ‘We must endeavor to drive the BJP out of power, by whatever means possible’, reasserted KCR during a press meet in Patna after his meeting with Bihar CM Nitish Kumar and in his presence.

KCR time and again reminds how various democratic and Left forces came together under the leadership of Lok Nayak Jayaprakash Narayan (JP) to trounce the dictator ruler of the day Indira Gandhi and coming to power in just 40-50 days hinting at the repeating of similar when need arises. Arrogance on the part of BJP will no more be tolerated warned KCR, citing the downfalls of dictators such as Hitler, Mussolini and Napoleon. KCR also predicted that BJP would be ousted from power within next 18 months. Against this background, TRS founder president and Telangana CM KCR moved a resolution changing the name of ‘Telangana Rashtra Samithi’ (TRS) to ‘Bharat Rashtra Samithi’ (BRS), on 5th October 2022, with a view to expand its activities nationwide and receiving recognition as National Political Party. Then he declared that ‘It is not a hasty decision to float a National Party.’ In tune with all these progressive developments, KCR brilliantly showcased BRS in National Capital, New Delhi, which sparked a nationwide debate and discussion.

Modi govt have hands to help oil firms but not to common man, flays KTR