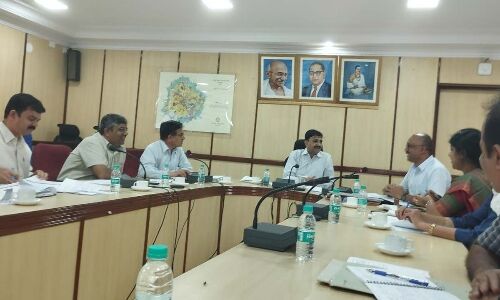 Bengaluru: The Bangalore Development Authority (BDA) Commissioner G Kumar Naik held a meeting with the officials on the steps taken so far regarding the implementation of the infrastructure works of Nadaprabhu Kempegowda layout being developed by the BDA, and ordered the completion of the works immediately.

In the meeting held at BDA head office, the BDA Commissioner Kumar Naik discussed with the officials on the problems and the solutions for the delay in the implementation of infrastructure works of Nadaprabhu Kempegowda layout.

The BDA Commissioner Kumar Nail directed the officials to pay attention to the pending 59 acres of land that has to be handed over for the construction of the Main Link Road (MAR) to the developer department. Also on the details of the lands already handed over to the developer department in the chainage of the length of the main link road from 0.70 to 10.77 km and the various road works undertaken on the said lands.

Regarding the appeal already filed in the High Court regarding the case in which the High Court quashed and ordered against the notification of land acquisition of Nadaprabhu Kempegowda layout in 2014, Nail asked the officials to convince the Court about the recent work done in the layout with appropriate documents and take appropriate action in relation to obtaining the decision of the Court regarding the notification order immediately. He also said that the matter should be discussed with the head of the legal department of the authority and appropriate action should be taken.

The details of the amount spent so far for land acquisition, construction and infrastructure works of the layout and the amount collected by the authority from the sale of plots were obtained. Around 193 acres of government land in the layout is currently in the hands of the revenue department and has not been handed over to the BDA. Also 150 acres of government land has been allotted to various tenants.

For the remaining 9.00m, 12.00m and 15.00m roads in the layout, in order to construct the roads under innovative technology in the first phase of soil stabilization, proposals should be prepared and approved in the BDA board meeting and the work should be taken up immediately. BDA Commissioner Kumar Naik directed that the variation proposal for water supply and drainage and electrification in the Kempegowda layout should be approved in the board meeting and then work should be carried out.

For providing infrastructure to the layout, tenders should be called for the various proposals approved by the board meeting of the authority to implement the works.