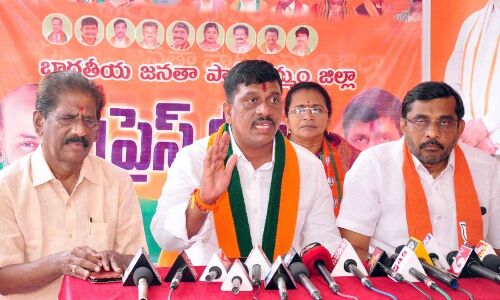 He squarely asked the CPM state secretary to explain why they want to support TRS party in the coming bypoll of Manugodu assembly. After launching scathing attacks on TRS for various wrongdoings, the CPM suddenly changed its stance, despite the government not keeping many promises such as 3-acre land for SC people and double bed room houses and assurances to farmers etc. What made the CPM change its mind, he asked.

Galla alleged that the CPM was supporting the TRS in view of the role of Thammineni family in the murder of Teldhapally TRS leader. He derided the Left party for sacrificing its principles for personal reasons. He demanded that the State government seek CBI probe into the murder incident. He said the party state chief and MP Bandi Sanjay Kumar would visit Teldharpally village to console the kin of the slain TRS leader Thammineni Krishnaiah.

Nikhil Sharma: How this guy is helping small businesses grow

It’s a fight between self-respect & pride