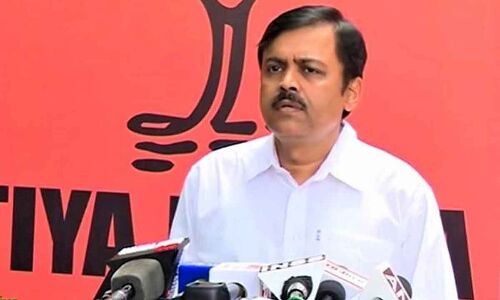 BJP Rajya Sabha member GVL Narasimha Rao has revealed that the Bharatiya Janata Party (BJP) has started operations to achieve a resounding victory in 2024 in the state and centre. He expressed confidence that they are going to prove that there is no other alternative BJP which will be winning 400 seats in the upcoming elections. He said that the Andhra Pradesh state is lagging behind due to the lack of BJP government in Andhra Pradesh and opined that there is a need for a double engine government here for development.

GVL Narasimha Rao announced that more than 5,000 meetings will be held in 175 assembly seats of the state with the aim of winning the next elections in Andhra Pradesh. As part of the expansion of the BJP, he explained that special focus will be put on the 144 seats which it did not win in the past. It was revealed that Visakhapatnam is also in that list and hence special attention has been given here. He said that the national leadership of BJP has specially focused on the two Telugu states.

GVL said that BJP is the future of AP as there is strong opposition among the people towards the YSRCP government. He also opined that there is no positive attitude towards the Telugu Desam Party and made clear that BJP and Jana Sena alliance is the only alternative to YSRCP’s rule. He made it clear that they are not entering into a new alliance with the Jana Sena.

Petrol and diesel prices today in Hyderabad, Delhi, Chennai and Mumbai on 07 September 2022