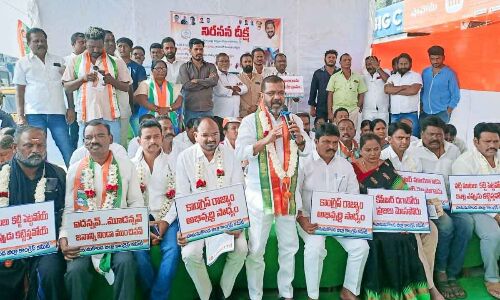 Warangal: Hanumakonda DCC president Naini Rajender Reddy came down heavily on Chief Minister and said K Chandrashekhar Rao who lives in a luxurious farmhouse in 100 acres has little concern towards the homeless poor people whose demand is to have a double bedroom house.

Staging a dharna along with the Congress cadres at Kazipet Chowrastha on Monday, Reddy criticised the BRS (earlier known as TRS) government for not providing double bedroom houses to the poor.

“Time and again KCR reiterated that having a double bedroom house is a semblance of dignity and the poor deserved it. KCR also promised to provide financial assistance of Rs 5 lakh for the construction of houses to the poor those who have their own plots. But once the elections are over, KCR conveniently forgets his promises,” Reddy ridiculed.

Recently in the Assembly, Health Minister T Harish Rao assured of providing Rs 3 lakh to 4 lakh poor people who have plots for the construction of houses. But the government is yet to make a move, Reddy said. KCR who has mastered the art of hoodwinking the people continues to cheat them with hollow promises, he added. Even though some of the double bedroom houses besides Sridevi Mall are ready, the ruling party leaders are not inclined to distribute them for reasons unknown, Reddy said, criticising the Warangal West MLA D Vinay Bhaskar. He said that people will teach the BRS a fitting lesson in the next elections for its failure to fulfill their aspirations.

On the other hand, the Congress during its regime before 2014 had provided Indiramma Houses. Every village has Indiramma Houses, the DCC chief said. The Congress will continue its fight against the BRS government until it provides financial assistance to the poor for the construction of houses, Reddy said.

Tirupati: YSRCP vows to win with a huge margin