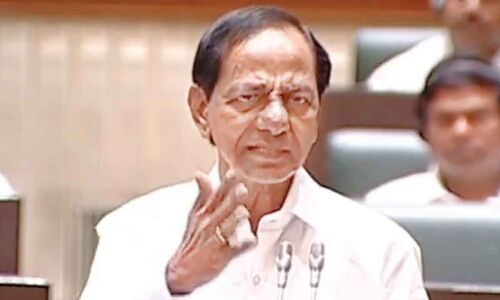 Hyderabad: The Union government on Tuesday convened a meeting of the chief Secretaries of the two Telugu states — Telangana and Andhra Pradesh — to discuss the pending issues under the AP State Reorganisation Act 2014, which need to be implemented by the Centre. The meeting would be held in New Delhi on September 27.

This meeting has raised a lot of curiosity in political and official circles in the state as both the Telugu states had recently locked horns on clearing the power dues. While the Centre had asked the Telangana government to pay Rs 6,000 crore to Andhra Pradesh, the Telangana government said the dues from the Andhra Pradesh government were Rs 12,900 crore. The TS government even alleged that the Centre was vindictive towards Telangana and hence it had turned a blind eye to the dues that are due from AP and sent a notice asking it to pay Rs 6,000-crore dues.

Chief Minister K Chandrasekhar Rao during his speech in the Assembly on Monday said that steps should be taken to see that AP releases Rs 12,900 crore and it could deduct the Rs 6,000 crore that was due from Telangana and pay the balance amount. In the backdrop of this, the Telangana government is preparing a report to expose the Centre’s alleged indifference towards the state.

Officials said that the Centre also did not heed to the request of the Telangana government to finalise the division of assets mentioned under Schedule 9 and 10 of the AP State Reorganisation Act. The AP government approached the courts demanding handing over of the immovable properties of some corporations in Hyderabad. After the bifurcation of Andhra Pradesh, officials said that AP has no right to stake claim to the immovable assets in Telangana. The Centre was also not taking initiative to transfer Rs 450 crore which have been transferred mistakenly into the accounts of the Andhra government in the initial days of the formation of Telangana state. Telangana has been demanding this for the past eight years, officials said.

Other pending issues pertain to the setting up of Bayyaram steel plant, railway coach factory in Kazipet and tribal university.

The Tron (TRX) is Now Supported by the Payperless Cryptocurrency Wallet

India gets ready ahead of assuming G20 Presidency