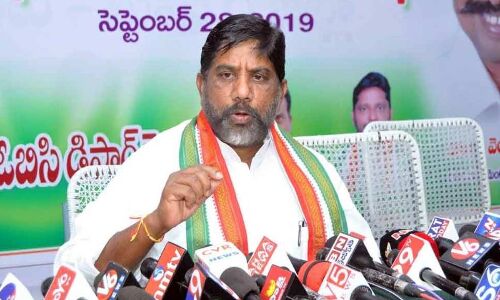 Speaking to media, Bhatti expressed anger at the BJP government. He said the BJP government had to failed implement the policies of the state bifurcation act in the last eight years. He alleged the delay was caused to trigger disputes between the two Telugu states.

On the central government diktat to the TS government to pay Rs.6.756 cores in power arrears to the AP government in 30 days, he faulted it for involving in the issue.

According to state bifurcation act, the NDA government failed to allot Bayyaram Ukku factory, Kazipet Railway coach, ITIR project, National Irrigation project and others to Telangana. The BJP government had also not been giving clarity on the projects for the last eight years, but now it was raking up power issues, he said.

The Congress leader said that the NDA government was trying divert public attention from its failures and was raising the power issue only to cause disputes between the two Telugu states for deriving political mileage. ZP Chairman L Kalamazoo Raj and officials participated in the programme.