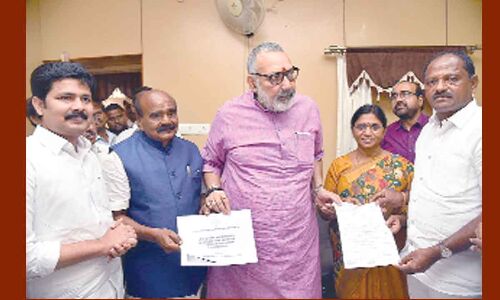 He met Union Minister for Panchayat Raj and Rural Development Giriraj Singh who was on a visit to Tirumala and Tirupati at Sri Padmavathi Rest house in Tirupati and explained to him various schemes being implemented in the State.

Later speaking to the media, the Deputy Chief Minister said that he has submitted a representation to the Union Minister disclosing the details of arrears under various schemes being implemented in the State and also sought some relaxations in some Centrally-linked schemes to benefit the poor people. Explaining further, he said that horticulture farmers having five acres were only eligible to derive benefit from the Central scheme and those having 10 acres were being considered as big farmers.

However, as these farmers were also becoming poor farmers due to poor yields, a request was made to consider those having up to 10 acres as eligible. Also in tribal areas, employment guarantee works should be linked to coffee gardens to benefit the tribals. The 90 working days under Pradhan Mantri Awas Yojana should not be combined with the 100 working days under MGNREGA but considered separately to provide additional employment.

He said that they asked the Union Minister to consider Chenchu caste, the most backward of the STs, to be made eligible for the employment guarantee scheme for 200 days. Under the Pradhan Mantri Gram Sadak Yojana Phase 1, still 624 kilometres of roads have to be laid. Hence, it should be extended till next March. Also, the Union Minister was asked to sanction the proposals sent for the construction of roads up to 970 kilometres and 76 bridges under Phase III.

Under the National Rurban Mission due to the withdrawal of Rs 48 crore, payments worth Rs 145 crore were stopped and they should be released soon. Tirupati MP Dr M Gurumoorthy, Chittoor MP N Reddeppa, Anakapalli MP Satyavathi, Joint Collector DK Balaji, NREGA state director China Tataiah and other officials were present.

Chiranjeevi or Pawan Kalyan can become CM only with Congress support