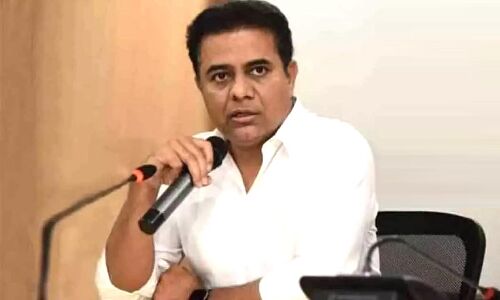 Slamming the BJP-led Centre government’s discrimination towards Telangana IT minister KTR on Saturday demanded Prime Minister Narendra Modi to make an official statement on why the Union Government was taking a step back on its promises to people of Telangana.

“It’s a shame that not a single promise made in the AP Reorganization Act has been kept either for Telangana or our sister State of Andhra Pradesh,” KT Rama Rao tweeted on Saturday.

The Minister slammed Union Tourism Minister G Kishan Reddy for misleading the people in the State with his false claims.

“Dear Kishan Reddy garu, I respect you as a brother but not seen a more misinformed and hapless Union Cabinet Minister. You had announced the Government of India sanctioned nine medical colleges to Telangana, which was an utterly lie. You don’t even have the courage to apologize,” KT Rama Rao tweeted, sharing images of the Union Minister’s past tweets claiming that the BJP Government had sanctioned nine medical colleges to Telangana.

Continuing the scathing attack on the Union Minister, KTR said the BJP leader was uttering blatant lies to please his ‘high command’ in Gujarat.

He tweeted “Subsequently you had announced that Union Government intends to establish Global Centre for Traditional medicine in Hyderabad. Of course, as usual, your Gujarati bosses have shifted it to their State. Again, you have misled the people of Hyderabad yet you don’t correct your false claim.”

He further tweeted “Continuing with your half-baked false propaganda, you have now started claiming that an integrated steel plant in Bayyaram is not viable as promised in AP Reorganization Act. You are clearly someone who peddles half-truths and false news to please your bosses in Gujarat,” he said.

Earlier on Friday, Union Minister for Culture, Tourism and Development of North Eastern States G Kishan Reddy criticised Chief Minister K Chandrashekar Rao and his family for hoodwinking people with false promises on the Bayyaram Steel Factory. Addressing media in the National Capital, he said the CM KCR and his family members are the real culprits of the Bayyaram Steel Factory and staging street dramas for votes besides spreading lies on the issue and making baseless allegations against the Centre.

He said it is effigies of the CM KCR and his family should be burnt and reiterated that BJP has been on the same stand on the issue of Baiyaram since the beginning and that it would act on the report of the expert committee on feasibility. The TRS doesn’t understand even though the same thing has been said many times and even in Parliament.

He said that the Central government under Prime Minister Narendra Modi has set up an expert committee on the feasibility of setting up a steel factory as per the Reorganisation Act. The committee, on examining it, several times had informed the Central government that setting up this factory was not feasible. All this happened within six months of the formation of a separate State. An expert committee led by the Steel Authority of India submitted a feasibility report in November 2014, Kishan Reddy, informed.

The Union Minister of Steel also gave a written reply in the Rajya Sabha on March 7, 2018, on the issue of the questions asked by the members of the Parliament. The Telangana State government also formed a committee in 2018. Ministers KT Rama Rao and Jagadishwar Reddy reviewed the findings of the committee. It had also said that the iron ore available in Bayyaram is not of good quality, recalled Kishan Reddy.

He said that despite all this, the TRS party is making meaningless criticisms regarding the Bayyaram Steel Factory. He said that besides playing with the sentiments of the people of Telangana, they are throwing mud at BJP for political mileage. Kishan Reddy asked people not to fall into the trap of such rumours and understand the facts. Adding CM KCR and his family members during the 2018 Assembly Elections assured the people of Telangana, especially the people of the combined Khammam and Warangal districts, boasting that ‘if the Centre is not built, we will build the Bayyaram factory’. Even if the Central government does not cooperate, we will build a steel plant in Bayyaram.”

The Bayyaram factory would be constructed under the supervision of Singareni and TS MDC, and the TRS assured to provide employment to 10 to 15 thousand people. He dared the TRS to fulfill its promise of constructing the Bayyaram Steel Factory instead of making accusations against the Centre. He also asked whether people forget your frauds if you burn effigies with false accusations?” Kishan Reddy pointed out that the CM KCR and his family members are trying to portray their lies on the Bayyaram as the opinion of the people of the State. He said that there is a lot of awareness increased among the people of Telangana and they can see through the tall claims and dramas.

Kishan Reddy suggested that all the original TRS workers should burn the effigies of KCR and his family members who are cheating people in the Bayyaram factory. Kishan Reddy said that looting has increased in the State and governance has become chaotic.

The Union Minister said that problems were caused due to the Dharani portal and the State has not been able to solve even a single case out of nearly 4 lakh applications pending. He charged that the TRS government is creating hurdles in Telangana even for implementing cent percent Central government-sponsored schemes. He said that the State is not cooperating in land acquisition required for the Central projects.

He suggested to TRS that it would be better to think of a national party after fulfilling the aspirations of the Telangana people first.

5G India launch: When Airtel, Jio and Vi users will get 5G