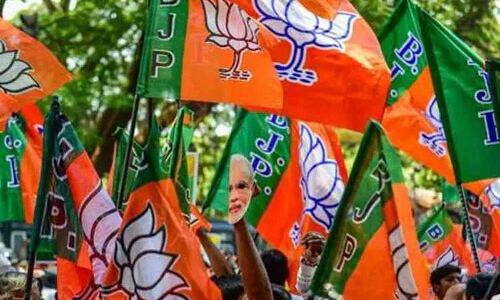 New Delhi: The Congress made such a tweet amidst its Bharat Jodo Yatra, upon which a political uproar arose. Congress shared the picture of the fire in the RSS trouser in a post made from its official Twitter handle.

Through this picture, Congress has targeted the RSS-BJP. After this, the BJP retaliated and called the Congress’s “Bharat Jodo yatra” as “Aag lagao yatra”.In fact, in its post, the Congress wrote that we are moving towards the goal of freeing the country from the atmosphere of hatred and to make up for the damage done by the RSS-BJP.

To free the country from shackles of hate and undo the damage done by BJP-RSS.

Step by step, we will reach our goal.#BharatJodoYatra 🇮🇳 pic.twitter.com/MuoDZuCHJ2

After this posted a picture in which the fire is seen in the trouser of the RSS and smoke comes out of it. The BJP got angry when this picture was posted.

BJP spokesperson Sambit Patra said in a press conference that this picture was tweeted by the Congress representing the BJP and the RSS and showed the fire burning in it.

Congress has tweeted this to instigate people. Their Bharat Jodo Yatra is “Aag lagao yatra”.It is not the first time that Congress has posted such a picture on Twitter.Not only this, other BJP leaders also came out against it on social media.

Jitin Prasad, a minister in the Yogi government of Uttar Pradesh and former Congress leader, tweeted and wrote,Political differences are natural and understandableBut is this kind of mentality needed to burn political opponents? This politics of negativity and hatred should be condemned by all.

Tejashwi Surya, National President of BJP Yuva Morcha and MP from Bangalore, wrote that in 1984, the fire of Congress burnt Delhi.After this, 59 ‘kar sevaks’ were burnt alive in Godhra train in 2002. He has again given a call for violence.Congress is no longer a political party and Rahul Gandhi is fighting only against India.

Petrol and diesel prices today in Hyderabad, Delhi, Chennai and Mumbai on 12 September 2022