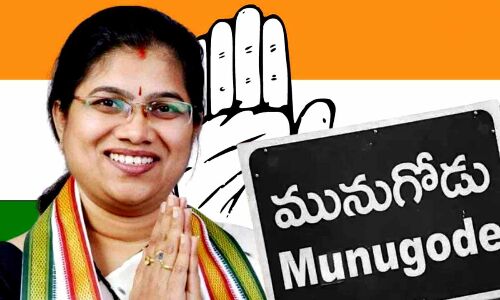 Hyderabad: The Congress on Friday finalised the name of Palvai Sravanthi for by-election to be held for Munugodu Assembly constituency soon. Seat fell vacant with the resignation of Komatireddy Rajagopal Reddy, who quit the Congress and joined the BJP.

The TPCC sent names of four aspirants to the Congress high command. They are Palvai Sravanthi, Chalammala Krishna Reddy, Palle Ravi and Kailash Netha. The top leadership decided to field Sravanthi in by-election. She is daughter of former minister Palvai Govardhan Reddy.

Sravanthi was allotted MLA ticket based on a survey. There was a tie between her and Krishna Reddy in survey. Loyalty has worked in her favour. It may be recalled that Sravanthi, who aspired to contest from Munugodu in 2018 Assembly elections, strived for the victory of Komatireddy Rajagopal when Congress allotted ticket to him. In 2014, she contested for Munugodu but lost to rival TRS candidate. The BJP is fielding Rajagopal and TRS announced Kusukuntla Prabhakar Reddy as its candidate.

Presidents, Race and the Military, in the 1940s and Now, A Throughout Comparision

Election for Congress president to be held on October 17