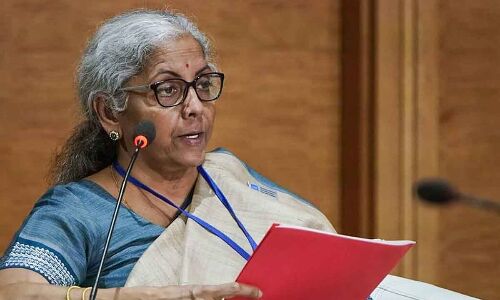 New Delhi: Finance Minister Nirmala Sitharaman on Monday said notes in circulation (NiC) has witnessed an annual growth of 7.98 per cent to Rs31.92 lakh crore as of December 2, 2022.

The demand for currency depends upon several macroeconomic factors, including economic growth and level of interest rates, she said in a reply to the Lok Sabha. The quantum of cash or banknotes in the economy depends on the requirement for meeting the demand for banknotes due to GDP growth, inflation, replacement of soiled banknotes and growth in non-cash modes of payment. She stressed that the mission of the government is to move towards a less cash economy to reduce the generation and circulation of black money and to promote the digital economy.

Both the government and RBI have taken measures to promote a less cash economy and encourage digital payment, she said. With regard to ‘Rationalisation of Merchant Discount Rate (MDR) for Debit Card Transactions’, she said the RBI has advised banks to ensure that merchants on-boarded by them do not pass on MDR charges to customers, while accepting payments through debit cards.

The Department of Revenue advised banks to immediately refund charges collected, if any, on or after January 1, 2020, on transactions carried out using the electronic modes prescribed under section 269SU of the Act and not to impose charges on any future transactions through the prescribed modes, the minister noted.

Minister of State for Finance Pankaj Chaudhary in a reply to the House said crypto assets are by definition borderless and require international collaboration to prevent regulatory arbitrage.

Congress has no appetite for battle

Indian-origin Sikh in Melbourne sued for $ 140 million in cryptocurrency

Capt Sandhu to continue as Head of Operations of Air India