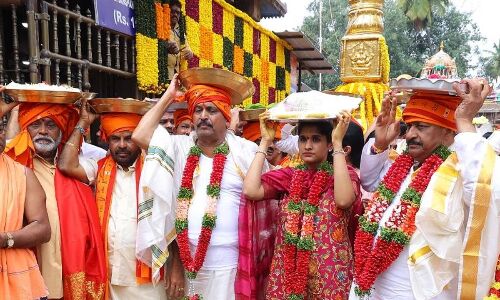 Srisailam (Nandyal): The Deputy Chief Minister and Minister for Endowments Kottu Sathyanarayana presented silk clothes on behalf of the State government to Swami and Ammavaru at Srisailam on Tuesday.

Prior to the Minister offering clothes to the presiding deities, special prayers were performed at the temple Raja Gopuram. Later, the silk robes were taken inside the temple and presented to the deities amid playing of spiritual music and chanting of mantras by the Vedic pundits and Archakas. The presentation of silk clothes is being followed since ancient times. The kings, knights and the royal descendants used to present the silk robes to Swami and Ammavaru during the Utsavams. Following the tradition, the State government is presenting silk clothes to the deities at Srisailam temple on two occasions every year. They are on the occasion of Mahasivaratri and during the Dasara festivi ies.