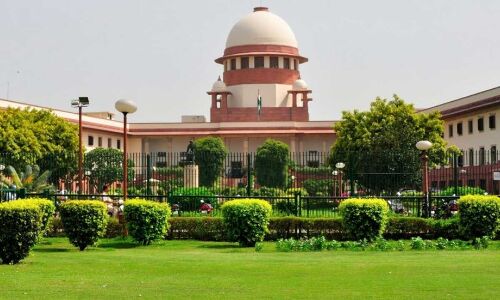 New Delhi: Reaffirming that forced religious conversion is a ‘serious issue’, the Supreme Court said on Monday that it is against the Constitution.

The apex court was hearing a plea filed by advocate Ashwini Kumar Upadhyay seeking direction to the Centre and states to take stringent steps to control fraudulent religious conversion by ‘intimidation, threatening, deceivingly luring through gifts and monetary benefits’.

The Centre told the court that it is collecting information from states on religious conversion through such means. Appearing before a bench of Justices M R Shah and C T Ravikumar, Solicitor General Tushar Mehta sought time to furnish detailed information on the issue.

“We are gathering information from the states. Give us a week’s time,” Mehta said.

When a lawyer questioned the maintainability of the plea, the bench said, “Do not be so technical. We are here to find a solution. We are here for a cause. We are here to set things right. If the purpose of the charity is good, then it is welcome but what is required to be considered is the intention.

“Do not take it as adversarial. It is a very serious issue. Ultimately it is against our Constitution. When everyone stays in India, they have to act per the culture of India,” the bench observed. The apex court will now take up the matter on December 12. Forced religious conversion may pose a danger to national security and impinge on religious freedom of citizens, the top court had said recently, and asked the Centre to step in and make sincere efforts to tackle the “very serious” issue.

Tata Motors mulling price hike for PVs from next mth

KTR stresses on need of investigative journalism to eliminate hatred