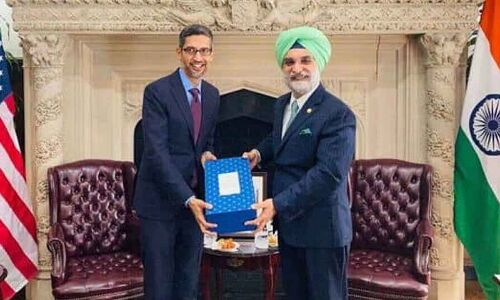 Washington: Google CEO Sunder Pichai has held discussions with the Indian envoy in the US, Taranjit Singh Sandhu, about the technology giant’s activities in India, particularly its aggressive push towards digitisation, as he became the first top Indian-American tech business leader to visit the country’s embassy here.

“Thank you” Ambassador Sandhu for the great conversation,” Pichai said in a tweet after his visit to the Indian Embassy in downtown Washington DC late last week. This is for the first time that a top Indian-American tech CEO has visited the embassy here.

“Appreciated the chance to discuss Google’s commitment to India and look forward to continuing our support for India’s digital future,” said Pichai, who in January this year was named among the 17 awardees to receive the Padma Bhushan. “Technology that transforms; ideas that enable!” tweeted Sandhu.

Brightcom, Qulabz tie up to set up innovation lab

Worried About the I.R.S. Scam? Here’s How to Handle Phone Fraud

Trump Tried to Protect Qualcomm. Now His Trade War May Be Hurting It