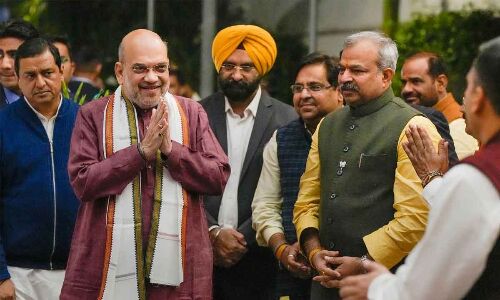 New Delhi: As the BJP headed to a massive victory in Gujarat, Union Home Minister Amit Shah said that the state had rejected “those who promised freebies”, in a swipe at Arvind Kejriwal’s Aam Aadmi Party (AAP) that is set to win a fraction of the seats it had hoped for.

“Gujarat has given an unprecedented mandate to Narendra Modi-ji’s BJP, which characterises development and public welfare by rejecting those who do politics of freebies and appeasement,” Amit Shah said in a series of tweets.

Gujarat is the home state of both PM Modi and Amit Shah.

“This massive victory has shown that every section, be it women, youth or farmers, are wholeheartedly with the BJP. Gujarat has always created history. In the last two decades, under the leadership of Modi ji, the BJP broke all the records of development in Gujarat and today the people of Gujarat have blessed the BJP and broken all records of victory. This is a victory of the unwavering faith of the public in the development model of Narendra Modi,” he added.

AAP, which mounted a strong challenge and pitched itself as the main rival of the BJP in Gujarat, led in five seats.

Arvind Kejriwal had, during his campaign, repeatedly put out handwritten notes declaring that his party would win in Gujarat and that AAP leaders Gopal Italia and Isudan Gadhvi would win. So far, none of that has proved true.

Reacting to the BJP’s likely historic victory in Gujarat, Union Defence Minister Rajnath Singh said that the “victory was a symbol of the faith that the people of the state had in Prime Minister Narendra Modi”.

The poll results, according to the Election Commission, showed the BJP heading towards a record-breaking victory in Gujarat as the final outcome was awaited.

The Defence Minister, while talking to the media in the Parliament House complex, said that the situation was not surprising to him or the party.

Union Parliamentary Affairs Minister Pralhad Joshi described it as an acceptance of Gujarat’s model and expressed gratitude to the people for giving them a big victory.