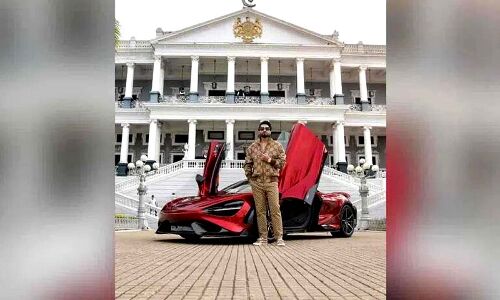 Hyderabad: Naseer Khan, a Hyderabad-based businessman has purchased McLaren 765 LT Spider, one of the most expensive supercars officially available on sale in India after shelling out Rs 12 crores. The slick model is one of the fastest convertibles to be rolled out of McLaren’s production line. It takes 11 seconds to open and stow the ultra-lightweight single-piece electric Retractable Hard Top. The bespoke carbon fibre body is carved and sculpted to increase downforce. And improve cooling.

The McLaren delivered to Naseer Khan is the first 765 LT Spider. However, it is not the first McLaren supercar officially delivered to a customer in the country. McLaren announced it was officially entering the Indian market a year ago, and around that time; they delivered the 720S Spider to West Bengal-based businessman Parveen Agarwal.

People will not vote for BJP in 2023 polls: Manickam Tagore

Will celebrate 67th Kannada Rajyotsava in a meaningful way: Bommai