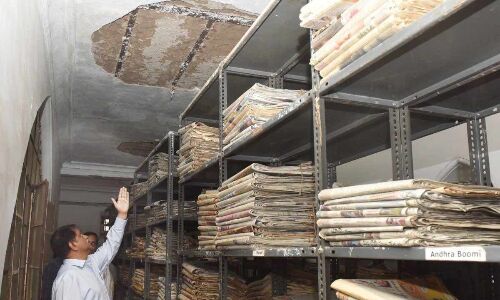 Hyderabad: Among the oldest libraries of Hyderabad, the State Central Library, also known as Asafia State library at Afzalgunj that flourished alongside many iconic Nizam-era monuments, is all set to receive a new lease of life.

Established in 1891, the Asafia library is one of the biggest public libraries in the country with a collection of over 5.5 lakh books, newspapers and other periodicals.

After taking up several projects including the conservation of heritage Boalis (stepwells), and other heritage structures, the Urban Development Special Chief Secretary, Arvind Kumar to take up the restoration of the Central library. On Wednesday, Arvind Kumar along with Hyderabad Metropolitan Development Authority (HMDA) and heritage conservation team inspected to assess and finalise the restoration of the library.

Earlier on August 29, AIMIM chief and Hyderabad MP Asaduddin Owaisi visited Telangana Central Library and urged the State government for the urgent uplift of the historic library. The historic library is not able to keep up pace with the technology driven new generations and is also losing its charm. In spite of having a rich history and in possession of rare and ancient books, some dating back to the 17th century, it is losing readership due to ill-maintenance of the library.

With lack of maintenance, continuously chunks of roof and walls would crumble which is posing danger. Broken benches, tables, cobwebs, empty chairs and dusty books welcome students here. During rainfall, the water oozing from the ceiling during the rainy season poses a grave threat to priceless books of being damaged permanently.

The five-storied rare books section called ‘paanch manzil’ needs immediate attention. This section is unique as each floor is supported by book racks and stairs made of cast iron as there are no pillars.