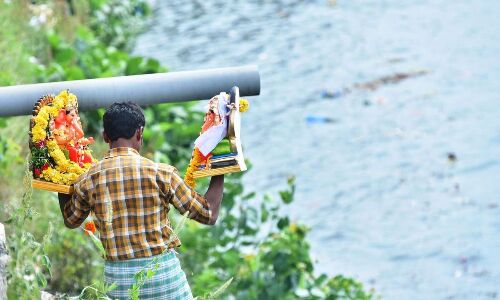 Hyderabad: The state government and the BJP seem to be locking horns over the Ganesh immersion programme to be held on Friday.

While the government claimed that it was making all necessary arrangements for immersion of big and small clay Ganesha idols in Hussain Sagar and has constructed separate ponds at various locations for immersion of PoP idols, the BJP and Bhagyanagar Ganesh Utsav Samithi leaders alleged that the Government was creating hurdles and if it does not make proper arrangements, they would not move the idols from the Pandals.

Bhagyanagar Ganesh Utsav Samithi leaders Ravinutala Sashidhar, Kirodimal Narsinghpuria, M Rama Raju and Bhagwanth Rao said the police were creating hurdles. They were also asking organisers to take up immersion on Thursday. They said Friday was the day of Anantachaturdashi and hence immersion should be done on that day only.

Meanwhile, BJP state president Bandi Sanjay warned that the party with the help of Ganesh Utsav Samithi would change the procession route and proceed to Pragati Bhavan the official residence of the Chief Minister if the government fails to make proper arrangements at Tank Bund. He alleged that the government was trying to divide people on the basis of caste and community and hence they should thwart all such attempts of the government. The time has come to unite the entire Hindu community in the state to safeguard the Hindu dharma, he added.

On the other hand, the Samithi leaders said they would take out a bike rally around Tank Bund on Tuesday to study the arrangements being made for the immersion and decide on the next course of action thereafter.