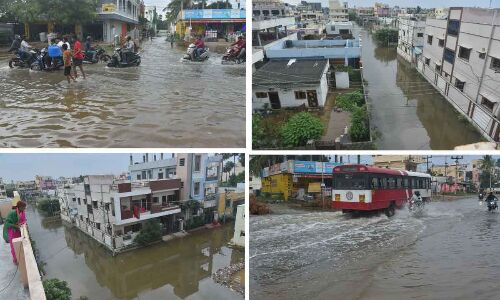 Hyderabad: Following the torrential rains, several areas in the city came under the sheets of rainwater forcing people to spend sleepless nights as rainwater entered homes. These rains had not only impacted the low-lying areas across the city, but also the areas which never get flooded during rains.

It is said that after the Hyderabad floods in Nizam’s dynasty, Nizam VI, Nawab Mir Mahboob Ali Khan constructed a stormwater drain system. Since then, this century-old stormwater drain system used to works and several areas in the Old city, never gets flooded in rains and no stagnation of water, and had also not during the Hyderabad witnessed floods in 2020 which damaged the city, but for last two years, these areas were being inundated in the sheet of rainwater. Residents and heritage activists blamed the civic body that they had disturbed the century-old stormwater drain system and now the areas are facing inundation.

According to the heritage activist, in each monsoon, where several areas of the city witnesses water inundation, this stormwater would not stagnate in the parts of Old city with the Nizam drain system in areas like Charminar, Moghalpura, Shalibanda, Khilwat, Purani Haveli, Fateh Darwaza, Hussaini Alam, Doodh Bowli, Kotla Alijah, Panch Mohalla, Pathergatti, Panjeshah, Qazipura, Afzal Gunj, Jumerat Bazar and several colonies of Golconda, the reason the century-old stormwater system which was constructed by the Nizam VI.

“During the heavy rains this year and on Monday, several areas were flooded even the areas which never saw inundation. Areas like Charminar – Moghalpura – Shalibanda – Hussaini Alam – Panch Mohalla – Pathergatti – Moazzamjahi Market – Mallepally and several others. Water entered in houses and the area was inundated with water. Water was up to 3-feet damaging the electronics and vehicles and children were seen swimming in rainwater in Mallepally,” said Mohammed Ahmed heritage activist.

Most of the localities in the Old City used to be dry and safe. “The Nizam system works to keep the Old City safe from stormwater stagnation. The system is still serving despite the increase in modernisation and population, but due to various other civic works the system was damaged. Rainwater could not free flow and was flooded for hours,” he pointed out.

“Each year, the monsoon action plan will be initiated by the civic body, which includes desilting of sewers and nalas, demolition drive of dilapidated structures and some other few works. But no proper plans and works were initiated. Several works were also incomplete. The government and city planners must take steps in the city to prevent rainwater inundation,” said Mohammed Asif Hussain, another activist.