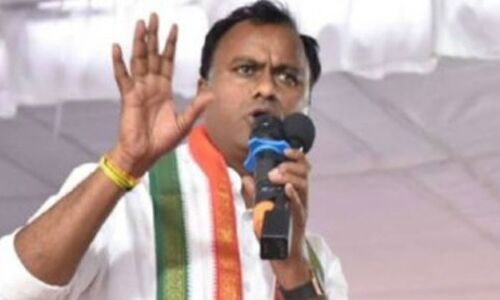 Munugodu: Former MLA Komati Reddy Rajagopal Reddy said the people of the Munugodu constituency would win in the battle for ‘dharma’ in the upcoming bypoll.

He attended a meeting in Gattuppala on Sunday, where former village sarpanch Namani Jagannadham, ward member Pagilla Shankaraiah and other leaders from various parties joined the BJP in his presence. Speaking on the occasion, he said he was not alone in the fight against the TRS government and that the people were standing by him. It was their poll battle. He termed the election as a battle between self-respect and pride.

The former MLA strongly criticised the CM for not caring for the development of the constituency. He even refused to give him appointment to apprise him of people’s problems. However, the CM came down and announced some sops for Gattuppala mandal after he met Union Home Minister Amit Shah. KCR who was usually confinied to his farm house was now stepping out and taking part in activities in the constituency following his resignation only.

Reddy reiterated that only BJP can end the family rule in the state. He alleged that corruption took place in the state like never before, in irrigation projects. The CM bought Congress MLAs by spending crores of rupees.