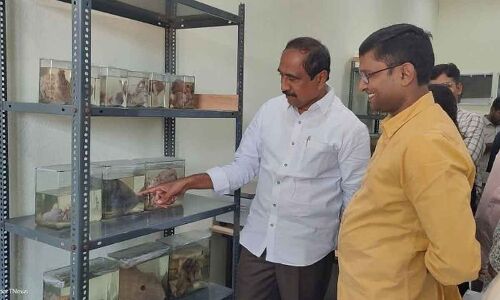 Jagtial: MLA Dr. Sanjay Kumar has on Monday visited the Government Medical College here on the eve of the opening of the college on Tuesday.

The bed capacity at the District Hospital would increase to 500 beds from the present capacity of 330. Assistant, Associate Professors, teachers and doctors have been appointed. The State government has also relaxed the age limit in the appointment of professors, Dr. Sanjay Kumar said.

He said that the tenders for classrooms with Rs 140 crores have been completed and soon the foundation stone would be laid by the hands of the Chief Minister. Rs 11 crores have been sanctioned for the road on four sides.

Out of 150 medical college students, 128 would be from Telangana. Now 6370 medical seats were available in the State. The BJP MP who failed to ensure sanctioning of funds should visit the college to see the facilities. He said that AIIMS, which was set up five years ago was still lacking facilities like labour room and operation theatre, but the Medical Colleges set up by the State government have all the facilities. He congratulated Jagtial student Sushma for getting a seat in the college.