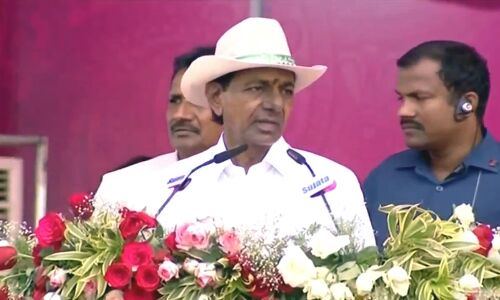 Telangana State Chief Minister K Chandrasekhar Rao inaugurated the new office of Peddapalli Integrated Collectorate on Monday. On this occasion, the CM unveiled the plaque of the Collectorate. Later, special pooja was performed in the office and the collector was seated in the seat of the collector’s chamber. Earlier, the CM received the salute from the district police at the Collectorate. The government has constructed a building with state-of-the-art facilities at a cost of Rs 48.07 crore on 22 acres of Peddakalvala SSRSP camp site in the district centre.

The building has six blocks and 98 rooms. 40 rooms were built on the ground floor, 29 on the first floor and 29 on the second floor. While the offices of 41 departments are located in the building complex, the chambers of welfare, fisheries department, collector and other high officials have been set up in the ground four. The camp offices of the administrative officer and additional administrative officers are fully completed with Rs. 7 crores.

Google launches software to make apps that work on all devices

State BJP armed with ammo to take on TRS