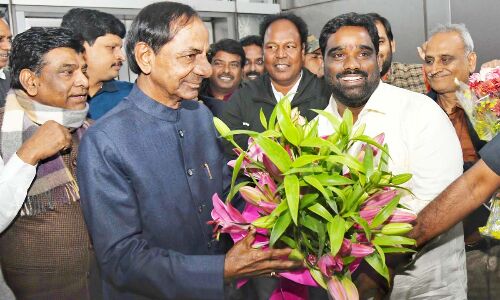 Hyderabad: The ideology of Bharat Rashtra Samiti, its approach towards achieving the proposed goals and its objective of economic reforms, its vision of power, irrigation, education and agriculture in the larger interest of the nation will unfold soon.

BRS president K Chandrashekar Rao, who arrived in New Delhi on Monday along with family members to participate in the two-day Raja Syamala Devi Yagam from Tuesday, will be focussing attention on giving final touches to the party’s constitution, its aims and objectives which need to be submitted to the Election Commission. KCR feels that there is a need for bringing a paradigm shift in the lives of BCs, SCs, STs and minority communities. The proposed constitution would reflect such ideologies of the BRS, senior leaders told Hans India.

The proposed party constitution will also speak about the multi-cultural identities – unity in diversity, secularism, border issues, defence system, tackling terrorism, women empowerment, and aspirations of youth. Since KCR wants the BRS to get the recognition as a national party soon, he would be making the exercise to present a constitution to the EC which would reflect the main goal of BRS.

Senior leaders said KCR is likely to present the party’s draft vision document on December 14 at New Delhi during the deliberations with some intellectuals, likeminded political party leaders and retired bureaucrats.

Leaders said that political empowerment of different sections and its stand on the promotion of farmers and backward communities as the future political force will also be included in the party agenda as the BRS has come with ‘Aab ki Baar Kisan Sarkar’ as its slogan. KCR had also held a series of meetings with farmers’ associations recently and proposed fielding them in the next elections from their respective states on the BRS ticket.