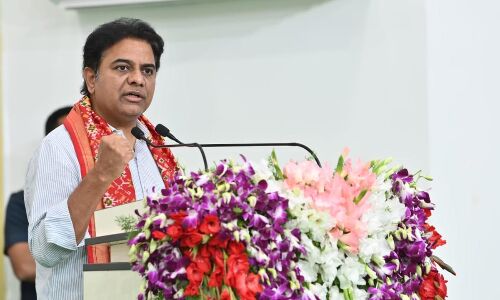 Nirmal: Telangana IT and Municipal Administration Minister K Taraka Rama Rao (KTR) lashed out at IIIT Basara officials over recent food poisoning incidents on the campus. Minister KTR and Education Minister Sabitha Indra Reddy and others participated in the convocation of Basara IIIT on Saturday.

Speaking to the officials, Minister KTR fired at the IIIT officials over food poisoning incidents and ordered the VC to change the mess contractors immediately. He further ordered the officials to provide quality food to the students.

Minister @KTRTRS participated in @RGUKT_Basara‘s 5th Convocation Ceremony as the Chief Guest along with his cabinet colleagues @SabithaIndraTRS and @IKReddyAllola. Awarded degrees to the Graduating students, and gold medals to meritorious students. pic.twitter.com/vzrRRNQgDW

Telangana IT and Industries Minister KT Rama Rao gave away laptops and uniforms to students of the RGUKT-Basar at a programme held on the campus on Saturday.

Rama Rao, who along with Ministers P Sabitha Indra Reddy, Allola Indrakaran Reddy and Government Whip Balka Suman reached the university to participate in the 5th convocation of the institution, handed over laptops and uniforms to students of Pre-University Course (PUC)-I year. He said the State government was determined to ensure better quality infrastructure and education to the students of the university.

The Minister later convened a review meeting with the authorities of the institution over progress of developmental works, steps to improve academic performance of the students and provision of employment and higher education opportunities.

Looking forward to delivering on every commitment given to the institution & students pic.twitter.com/NBHcKrdauZ

Statue of Superstar Krishna to be unveiled on Sunday

Hyderabad: Many areas in city still reeling under water

Hoardings congratulating KCR on launch of BRS erected in Vijayawada