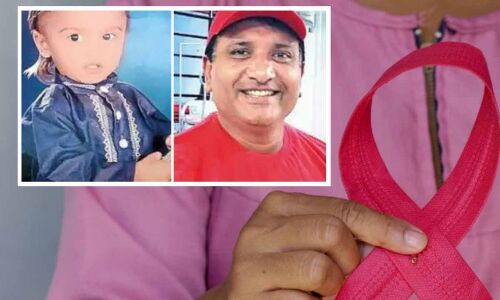 A 45-year-old man who lost his oldest son to deadly blood cancer found solace after 17 years. It took place when his stem cell donation in Bengaluru, Karnataka, spared and saved a teenage girl’s life.

Businessman Kishor Patel, who has offices in Kutch and Bengaluru, expressed his sorrow at his son’s premature death from incurable blood cancer. He was troubled by his child’s death day and night, and he constantly regretted that he could not have saved his life.
At the young age of 21 months, Mohit, Patel’s oldest son, passed away from leukaemia. An advanced third stage of cancer was discovered in the child. Despite the family’s and friends’ best efforts, including seeking medical advice from specialists even in the United States, he was still not responding to medical therapy at this point. The youngster tragically died in 2004.
The inability to save his son’s life, according to Patel, a manager of a timber company, tormented him for years until he was given the opportunity to save the life of another sick child in Bengaluru, Karnataka, 17 years later.
After Mohit, the 45-year-old had two other sons, but he felt compelled to help someone in need because he believed God had made him a conduit for changing the life of the young person. In order to save the life of a teenage girl with leukaemia in 2021, Patel claimed to have given stem cells.
At the height of the COVID epidemic in 2020, Patel registered for stem cell donation after attending a DKMS-BMST event, which raised awareness of blood cancer, thalassemia, and other blood-related ailments.
Meanwhile, the businessman signed up right once, donated his blood, and became a champion for the cause, inspiring many others to follow suit.
previous post