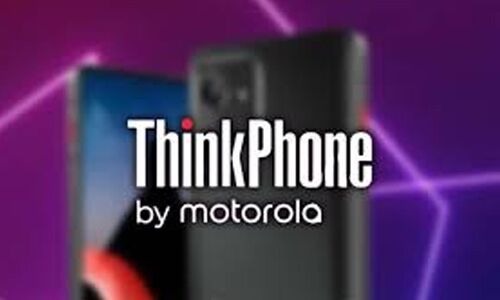 Did you dream of a similar carbon fiber Lenovo ThinkPad design in a phone? Well, your dream may come true soon because leaked images of a “Motorola ThinkPhone” on The Tech Outlook (spotted by Android Police) show a phone in the exact carbon fiber styling of Lenovo’s ThinkPad laptops. Motorola’s owner Lenovo is using the conventional ThinkPad font on the ThinkPhone.

Leaked specs suggest that the ThinkPhone may use a Qualcomm Snapdragon 8 Plus Gen 1 chip inside with either 8GB or 12GB of RAM and up to 512GB of storage. That’s not Qualcomm’s latest flagship Snapdragon 8 Gen 2 chip just beginning to come in new devices, but the same chip launched in May that’s been shipping in phones from Honor, Oppo, and Xiaomi ever since.

The ThinkPhone may also offer a 6.6-inch OLED display (1800 x 2400) capable of 144Hz and HDR, a 32-megapixel front-facing camera, and a triple-camera array on the rear with a 32-megapixel primary camera. 50 megapixels. 13-megapixel ultra-wide angle and 2-megapixel depth sensor.

Blurry marketing images also show some integration with Lenovo laptops, but exactly which features will be supported is still being determined. The leak doesn’t mention availability, price, or whether the ThinkPhone will be available outside China. Given that we’re only weeks away from the Consumer Electronics Show in January 2023, followed by Mobile World Congress a month after, it’s reasonable to assume that we could see an official ThinkPhone announcement soon.