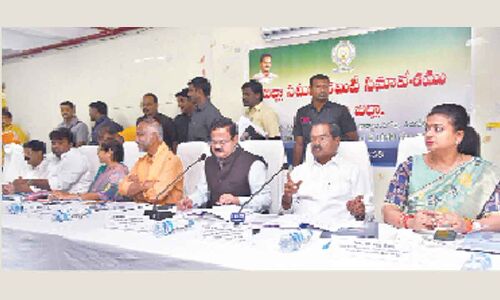 Tirupati: Deputy Chief Minister and district in-charge minister K Narayana Swamy felt that the Navaratnalu schemes implemented by Chief Minister YS Jagan Mohan Reddy have been changing the lives of poor for betterment. Every family has been treating the CM as their elder son and it is the responsibility of officials to take the government schemes forward with the cooperation of public representatives.

He chaired the district review committee (DRC) meeting held at the Collectorate here on Saturday. It was attended by the Minister R K Roja, Collector K Venkataramana Reddy, MP Dr M Gurumoorthy, ZP Chairpersons Govindappa Srinivasulu – Chittoor and A Arunamma – Nellore, MLAs, MLC and other officials. At the beginning of the meeting, all the dignitaries took pledge commemorating the Constitution Day.

Speaking on the occasion, Deputy CM said that the district was in fifth place in the state in Jagananna housing scheme. Under the second phase of Nadu Nedu, 1,079 school works were going on with Rs 332 crore while in the first phase Rs 164 crore were spent for works in 2,343 schools. To provide better healthcare for the poor, 437 YSR Village Clinics are being constructed.

Land resurvey programme was taken up in the state after 100 years which has been completed in 69 villages. It is being held in another 172 villages which will be completed in one year and all the farmers will get ownership documents. E-crop was completed pertaining to 62,418 farmers and 93 per cent of e-KYC has been completed. The Deputy CM said all the people in the state have been expressing happiness over the plethora of government schemes.

Minister Roja said that the CM has fulfilled 98 percent of the assurances mentioned in the party manifesto. She brought to the notice of the meeting that the people were asking to send the 104 vehicles for some time to the habitations also. ZP Chairman Srinivasulu felt that after completing the works in schools under Nadu-Nedu, they should be inaugurated by the public representatives.