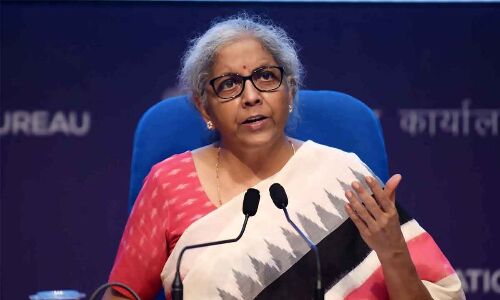 Hyderabad: Union Finance Minister Nirmala Sitharaman taking a dig at the TRS on the allegation of the State contributing more than what it gets from the Centre, asked if the same is applied in Telangana.

She said Hyderabad contributes 55 per cent of the revenue of the State. When the State government takes up a project in Adilabad will it put up a banner that the funds for the project are footed by the taxpayers of Hyderabad? The Union Finance Minister said that if every state in the country says that they have contributed a sum and they should get back the same, that’s not how the taxation principle work, adding, that such conduct of regionalism holds good for rhetoric, for media consumption and to keep political temperatures up. But, it is ‘regressive’ and ‘disingenuous’, she said.

On the issue of labeling of the schemes, she said that the TRS government was labelling the Central schemes as its own.

Further, if the State government borrowed funds or spent from its own State resources for a project, “we have no objection” to have a name of yours. But, you can’t change the name of a Central scheme (no matter how small its share) you cannot call it your scheme,” she said. Refuting that the Centre is discriminating the Telangana in the release of funds, she said that the Centre has brought a reform configuring disbursal of scheme funds through digitization.

The moment the State deposits its share in the scheme, both the Centre and State shares would be disbursed in digital mode. That apart, the minister said that the devolution of central taxes is done on monthly basis as per the formula of the Finance Commission. There is no possibility of discriminating or showing favour to another state. For, “it is all done as per the system in place,” she said. Besides, the cess collected goes into meeting the education, road infrastructure, and hospitals for which they are collected. Though the Centre collects they go to States only, she clarified.

The Minister said that State borrowings out of the budget will be affecting the state, also much out-of-the-budget borrowings are not informed to people and the legislature.

The out-of-budget borrowing sources through the quasi-government organisations show that the borrowing is raised beyond their paying capacity, she said.