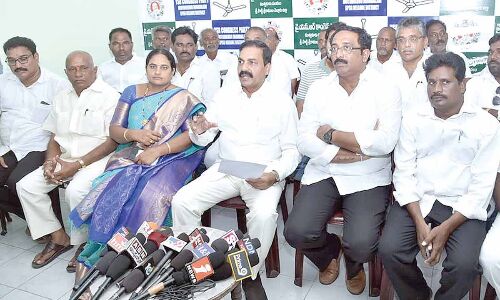 Nellore: Agriculture Minister K Govardhan Reddy announced that the state government will provide a package of Rs 25,000 to all families of non-fishermen category who are having white ration cards as part of the R&R package in the Krishnapatnam Port area oustees. Addressing media at Muthukuru on Monday, he said 17,750 families were getting Rs 25,000 and other 3,350 families would be benefitted from the package with Rs 10,650.

He said Chief Minister Y S Jagan Mohan Reddy was transferring the assured amount of Rs 35.74 crore to the bank accounts of beneficiaries directly. This is an assurance made in 2019 and now the state government was fulfilling it now. He reminded that former CM Dr YS Rajasekhar Reddy assured the port and sanctioned it. He subsequently allocated Rs 32 crore as a package under R&R for fishermen of four villages. The non-fishermen package was also provided to around 2,000 families too. The Congress government announced a non-fishermen package for 10,000 local population and it failed to keep its promise. Later, Chandrababu Naidu assured the non-fishermen package to the SC-ST population at Rs 3,500 per family and they also failed to provide it. But, he said, the YSR Congress government announced and providing it to all eligible shortly.