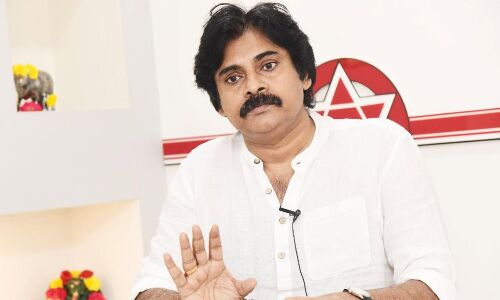 The Jana Sena party has taken up a protest program under the name ‘Jagananna’s Colonies Pedalandariki Kannillu in Vizianagaram to inspect the housing layouts assigned to the poor farmers. He will reach Gunkalam in a while. As part of this, Pawan will inspect the Jagananna Colony in Gunkalam.

Meanwhile, Jana Sena workers are welcoming Pawan Kalyan who was on his way from Visakhapatnam to Vizianagaram. He was felicitated at Anandapuram by his fans with s huge garland.

On this occasion, many leaders and activists displayed placards asking to take initiative to solve the problem of Simhachalam lands. A huge crowd of fans and soldiers gathered to see Pawan Kalyan.

As per the schedule, Pawan, who is in Visakhapatnam, will reach Gunkalam layout, which is the largest with around 12,000 houses. There are allegations that local leaders and MLAs who had information about the location of layout prior to the announcement, had forcibly grabbed the lands from the farmers at lesser price.

DpBOSS: A website for Authentic and Reliable Satta Matka Results