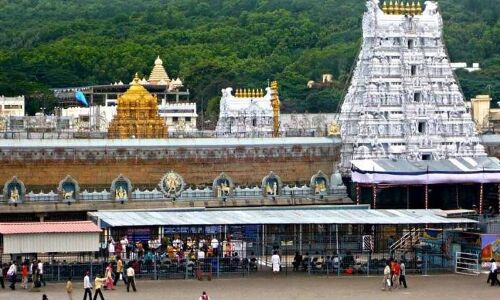 At the recent TTD board meeting, two decisions taken by the board came in the press prominently; one, to gold-plate the upper portion of the sanctum sanctorum. Since I was EO, TTD, and strongly opposed in those days the project of Anand Nilayam Ananta Swarnamayam which was subsequently shelved, some from the press rang up to enquire whether the present proposal of the TTDTTD is different from the project Anand Nilayam Anantha Swarnamayam. In fact, it is totally different and has nothing to do with the above project. The upper portion of the sanctum sanctorum was gold-plated during the reign of Krishnadevaraya and what is now being undertaken is a periodical repair and refixing which was done last about 50 years back. It does not tamper with the heritage structure since the gold plating of the upper portion is part of the heritage itself coming down from the days of Krishnadevaraya and Vijayanagara empire whereas the project Anand Nilayam Anantha Swarnamyam proposes to gold-plate the walls of the temple as a fresh proposal tinkering with the existing heritage structure.

The second decision of the board which is disturbing is the proposal to hand over construction of the temples funded by TTD in tribal areas and in areas where there are large-scale conversions to the endowments department and collectors. This may not be the right way of going about the project as part of propagation of Hindu dharma in areas where it is threatened by large-scale conversions.

Propagation of Hindu dharma is one of the main objectives of TTD and of the endowment department. There is a separate department of Hindu Dharma Prachar Parishad both under TTD and endowments department. Normally dormant and inactive, it becomes active depending upon the interest taken by the Executive Officer and the direction he can give to this organization. During my tenure as the EO, we focussed on conducting Srivari Kalyanams in remote areas with the mobile van fully equipped instead of conducting them in urban centres. It went to far-flung areas like Araku, Paderu, Gumma Lakshmipuram. People walked miles to come and have darshan of the lord and participate in the Kalyanams and take prasadam. It has a tremendous impact and as is the case most of these initiatives end the moment the officer concerned is transferred.

My successor took a different program of Managudi making the local temple the centre of propagation of Hindu dharma and the same was also a very successful initiative. Unfortunately, the successor EOs discontinued both the programmes. Around 2014 when TDP-BJP alliance came to power in Andhra Pradesh, an organisation Samarasata Vedika was formed which took up the responsibility of constructing temples in the remote areas and places where conversion is a major issue, train the locals as priests employ them and guide them properly as part of propagation of Hindu dharma with the help of TTD. Former EO of TTD PVRK Prasad and another retired officer from Kerala cadre MGK Murthy were involved with the activities of this organisation and started the work on a large scale. But the moment Chandrababu Naidu fell out from BJP, he withdrew all the funding to this organisation and a project taking off on sound lines faced a number of hurdles. It looked as if the protection and propagation of Hindu dharma is the responsibility of BJP not of TTD or the endowment department or that of Telugu Desam.

Jagan Mohan Reddy after he came to power continued the same policy of Telugu Desam initially but in the last one year allowed TTD to work with Samrasta Vedika on this project. It is this which the present board is trying to reverse by taking up this work through the collectors and the endowments department.

Collectors and endowments department are least suited to take up this work. It is not just construction work of temples but one of training the local archakas, hand-holding them, working with the local societies. An organisation like Samrasta Vedika or ISKCON would be better placed to focus on an issue like this. It would be better if TTD withdraws this proposal and continues to work with organisations like Samarasatha Vedika to implement the program more effectively.

Most effective manner of propagation of Hindu dharma in the villages is if the local priest is empowered and is given a proper orientation of social outreach. He should move around all the habitations in the village, give teertha prasadams and bless all. Since all temples today are government controlled, this can only happen if you have a government wedded to this philosophy or in the alternative Hindu religious institutions should be free of government control managed by a body with a focus on social outreach and propagation of Hindu dharma. Till then expecting the Hindu temples and institutions under the control of government to perform this task is like tying the legs and asking them to run in competition with other religious agencies which have all the funds and necessary freedom to propagate their religion by means – fair and foul.

Modi govt have hands to help oil firms but not to common man, flays KTR