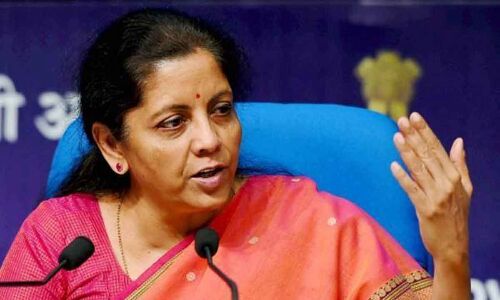 New Delhi: Finance Minister Nirmala Sitharaman on Thursday said India has ramped up the import of crude oil from Russia at discounted prices amid sanctions on Moscow as part of India’s inflation management.

“In a situation where global prices were going beyond anyone’s affordability, at that stage to take a very strong political decision, I respect the Prime Minister for his courage on this to get it from Russia because they are ready to give it to you at discount. And how speedily did we manage to do it,” she said.

India ramped up its import from Russia from about two per cent of the total shipment of petroleum products to 12-13 per cent in a couple of months as part of inflation management, she said at a seminar organised by economic think-tank Icrier. Amid sanctions imposed on Moscow due to the Russia-Ukraine war, some countries, including India, entered into bilateral deals for the purchase of oil and gas at discounted prices.

“I give credit to the statesmanship of the Prime Minister to make sure that we did keep our relationship with all countries, but yet manage to get the Russian crude. Sanctions, sanctions, but countries (including Japan and Italy, among others) are finding their own way to get that Russian fuel (crude, gas). That’s also a part of inflation management,” she said.

Oil prices shot up over $100 per barrel due to ongoing the Russia-Ukraine war stoking inflation globally. It affected those countries most that largely depended on imports. India is heavily dependent on oil-producing countries for meeting its energy needs. It imports 80-85 per cent of total energy requirements from abroad. India is the world’s third-biggest consumer and importer of crude oil. Retail inflation declined to 6.71 per cent in July due to moderation in food prices, but remained above the Reserve Bank’s comfort level of six per cent for the seventh consecutive month. The Consumer Price Index-based retail inflation was at 7.01 per cent in June.

Queen Elizabeth II Died At The Age Of 96

Petrol and diesel prices today in Hyderabad, Delhi, Chennai and Mumbai on 28 September 2022