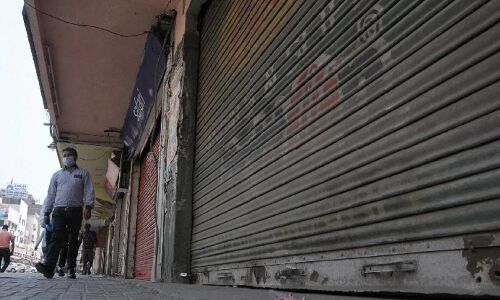 Hyderabad: In a shocking incident, a shutdown was observed in Bhadrachalam in Telangana’s Bhadradri-Kothagudem district on Monday to protest division of the temple town into three gram panchayats.

Shops and business establishments were closed in the town while few vehicles were plying on the roads.

The MLA alleged that he raised the issue of development of Bhadrachalam in the Assembly on several occasions but the government did not respond.

The GO has come as a shock to people in the town as they had been demanding its upgradation as a municipality. However, the officials say agency laws prevented the government from such an upgrade.

For upgradation, the government should take the approval of the Parliament and President to change the Scheduled Area acts.

Bhadrachalam village, where the Sita Ramachandra Swamy Temple is located, has been turned into one of the three gram panchayats. All the choultries, temple guest houses, the Mithila stadium, the annadana satram, the amba satram, business bazaars, the RDO office, the ACP office and the Transco office have been included in the Bhadrachalam GP.

Bhadrachalam GP will have 21 wards. Two other gram panchayats Seetharamnagar and Shantinagar will have 17 wards each.

Bhadradri Parirakshana Committee, which had been demanding upgradation to the municipality, also participated in the protest.

Leaders of the committee pointed out that the population of the town has touched 75,000. They alleged that the government took the decision to increase political posts. They said while the posts of three gram panchayat sarpanches and 55 ward members would be created, there is no benefit to Bhadrachalam and its people.

Cop In Gwalior Rescues A Cardiac Patient On A Crowded Street