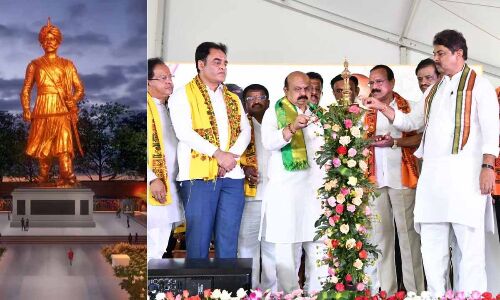 Bengaluru: Chief Minister Basavaraja Bommai on Thursday launched a unique drive to collect soil and water from across the state ahead of the inauguration of the 108-feet tall bronze statue of Nadaprabhu Kempegowda at the Bengaluru International Airport here in a couple of months.

In connection with this, the CM Bommai performed Bhumi Puja for the construction of Nadaprabhu Kempegowda Theme Park in a ceremony organised at the airport premises. On this occasion, the Chief Minister Bommai said, ‘Those who do not know history cannot create history. The state government is also installing a statue of Kempegowda at a cost of Rs 50 crore in the Vidhana Soudha premises. He also announced that the statue of Nadaprabhu will be installed in the Lalbagh premises.

For the installation of Kempegowda statue and theme park at the airport Rs 84 crore has been spent. He said that this statue is being named as ‘Statue of Prosperity’ to symbolise Kempegowda’s wishes.

The campaign will involve everyone in the state and will be a big step towards building a new Karnataka. He described it as a symbol of the government’s joint comprehensive development. Minister and Nadaprabhu Kempegowda Heritage Development Authority Vice Chairman Dr CN Aswath Narayan said, ”Kempe Gowda, who laid the foundation of this city, is the reason for the present glory of Bengaluru. Ahead of the inauguration of his statue, a state-level campaign will be held for 45 days from today. As part of this, holy soil and water will be collected from the lakes and rivers of all the villages. Later, Prime Minister Modi will dedicate the statue to the public. “We intend to unveil it on November 1, depending on the Prime Minister’s time,” he said.

Kempegowda was a visionary leader. From them the Bengaluru is safe and sound. He said that the state government is making a mark of the memory of such a great man. As part of the campaign, one LED decorated vehicle will go to all the 31 districts. He informed that there will be messages from holy men and a documentary film about Kempegowda will be broadcast.

The development of the theme park will be done in two phases. The work of the first phase will be completed in nine months. He explained that Rs 20 crore has already been released for this.

The Heritage Sites Development Authority is giving conservation status to 46 places related to Kempegowda’s life. He said that Kempapura in Magadi taluk is being fully developed as Veerasamadhi site.