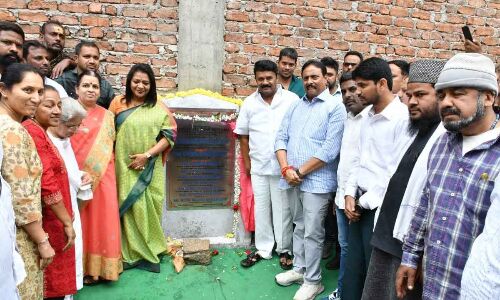 Minister Talasani Srinivas Yadav said that the government is working for the development of the state besides implementing welfare schemes to the poor. He along with MLA Danam Nagender along with GHMC Mayor Vijayalakshmi started the construction work of multipurpose community hall and Basti Dawakhana building to be built at a cost of Rs.2 crore in Banjara Hills Sriramnagar under Khairatabad constituency on Thursday.

Speaking on this occasion, the Minister directed the officials to ensure that the newly constructed building has a function hall, basti dispensary and Anganwadi center in view of the needs of the people of the colony and to develop and make the playground available. He said that since the last 40-50 years, the people of the colony have been asking for development work, but no one has paid attention.

Talasani said that with the efforts of Mayor Vijayalakshmi and MLA Danam Negender, the development works were approved. He said that CM KCR government will implement many welfare programs keeping the poor and middle class people in mind. He said that efforts are being made to provide all necessary facilities and amenities in the slums.

The minister said that construction and development of roads, flyovers and underpasses are being constructed in the city with special attention put by Municipal and Urban Development Minister KTR. He announced that multi-purpose function halls have been sanctioned in BS Makta, Deendayal Nagar, Gauri Shankar Nagar, Double Bedroom houses colony and other areas under Khairatabad constituency and the works will be started soon. Zonal Commissioner Ravi Kiran, DC Rajinikanth Reddy, EE Vijay Kumar and others participated in the program.

Statue of Superstar Krishna to be unveiled on Sunday