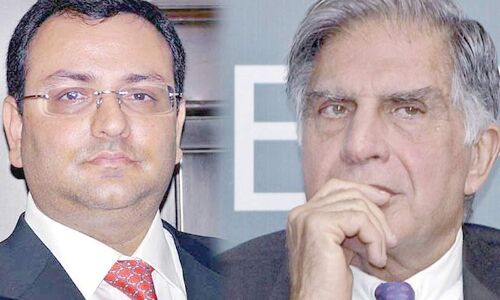 The contours of the corporate battle between Cyrus Mistry and Ratan Tata are being revisited now with the untimely demise in an accident of the former chairman of Tata Sons. The outpouring of praise for Mistry from diverse elements of society from politicians to businesspersons speaks volumes about the person that he was and his brilliance as an industry leader. Many details of the strife that took place during the four years of his tenure as chairperson of the Tata group are now being revealed by insiders. Even at the time, it was clear that the low profile nature of Mistry put him at a disadvantage against the Tatas which, like most large industrial houses, has always relied on well-oiled public relations machinery.

It seems on hindsight that the entire issue could have been resolved by negotiations and a spirit of compromise, given that both belonged to leading Parsi families. There would therefore have been many potential intermediaries who could have enabled both sides to reach a compromise. It would be difficult to apportion blame on this score as it is not known as to which side was more rigid on their respective stances. Even so, it is clear that the incident can be seen as a case study of what not to do in terms of corporate governance.

The background to the story is that Cyrus Mistry belonged to the eminent Shapoorji Pallonji family that has been in the construction business for well over a century. Ties between them and the Tatas began several decades ago when his grandfather, Shapoorji Pallonji bought 12.5 per cent equity shares in the Tata Sons group in the 1930s from the estate of FE Dinshaw. He had been an advisor and lender of the Tata family. The shareholding rose to 17.5 per cent after sale of equity by JRD Tata’s siblings. Currently the SP group holding is 18.37 per cent owing to a rights issue in the 1990s.

The relationship between the Tatas and the SP family was cordial in the past. It was probably this as well as appreciation of his management expertise that made Ratan Tata appoint Cyrus Mistry as only the second non-Tata chairman of the company in 2012, after Nowroji Saklatwala in 1932. But just four years later, he was unceremoniously removed from his post. It was then that Mistry filed a complaint with the National Company Law Tribunal and then the appellate tribunal, alleging mismanagement by Tata Sons. Later in February 2017, he was also removed from the board of the company.

Ultimately the Supreme Court ruled in 2021 that Mistry’s removal from the Tatas was legal. It also upheld Tata Sons minority shareholder rights rules.

The reasons for his being removed are cited by some observers as being partly due to his opposition to some of Ratan Tata’s key projects. These include the decision to acquire Jaguar Land Rover and the launch of the Nano car.

He was also opposed to Tatas entry into the high risk and heavily capital intensive aviation industry. He was equally not in favour of the loss making telecom services ventures and made the company exit this sector. But Mistry was criticised for not honouring the financial obligation to a Japanese investor. The Corus acquisition was another contentious issue and he began the move to sell it off during his tenure.

He is credited with reviving the fortunes of Tata Motors and investing in new products, efforts which are bearing fruit now. In fact, insiders have recently been quoted in the media as saying he laid the foundation for the next level of growth in the Tata group. It was over this same period, that Tata Power acquired Welspun’s renewable energy business for Rs 10,000 crore, enabling the company to shift towards a sunrise sector.

After leaving the Tatas, Mistry put his focus on the SP group which is reported to have a net worth of 30 billion dollars. The group’s interests are largely in the engineering and construction sector with many iconic buildings having been built by it.

He became involved with his own venture, Cyrus Investments but reportedly was also assisting in the financial restructuring the SP group along with his elder brother, Shapoor. Despite his many skills as a manager that have been attested to by his peers, there is no doubt that the tenure in the Tatas was a test of his mettle unlike any others. He had to undergo a boardroom coup where Mistry was given no opportunity to present his point of view.

On the legal front, the Supreme Court ruled in favour of Tatas on the issue of removal of Cyrus Mistry from the post of Chairman. Clearly all measures that were correct in legal terms were taken by the company. At the same time, it would have been in the fitness of things and in line with the reputation of integrity so dear to the Tatas, that not just the letter of the law but the spirit of it had been followed.

The entire Cyrus Mistry- Ratan Tata saga has thus not projected India Inc in a positive light. The events may have played out a while ago, but all that happened in the Mistry case needs to be considered by the rest of corporate India as a salutary lesson on the need to ensure better quality of governance for the future.

The spat between Mistry and the Tatas thus remains a unique case study of corporate governance. Decisions on top level appointments cannot be made on the presumption that the new incumbent will follow the same path as his predecessor. Besides, lines of communications always need to be kept open so that there is a greater understanding between all concerned. If such issues are kept in mind by industry leaders, the possibility of similar corporate battles may recede in the future.

India, China may produce iPhone 15 together next year

Further consolidation likely before a fresh up move

Petrol and diesel prices today in Hyderabad, Delhi, Chennai and Mumbai on 05 September 2022