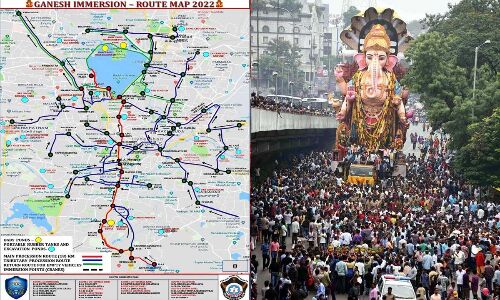 The Telangana state government has declared a holiday for all government offices, schools and colleges in Ranga Reddy and Medchal Malkajgiri districts as well as Hyderabad twin cities on Friday.

The government has given holiday to three districts on the occasion of Vinayaka idol immersion.

However, the government has declared the second Saturday on 12th of this month as a working day. Chief Secretary Somesh Kumar has issued orders to this effect.

The Hyderabad Traffic Police has released the route map for Ganesh immersion. The routes from which the idols should be brought towards the tank bund have been clarified through this route map, which was released by Hyderabad police through Twitter.

In exercise of the powers conferred upon me under section 21 (1) (b) of Hyderabad City Police Act, I, C.V. Anand, I.P.S., Commissioner of Police, Hyderabad do hereby notify for the information of the general public that in order to relieve congestion https://t.co/n4cztpYOQ9 pic.twitter.com/TJU4sQ3GmJ

Petrol and diesel prices today in Hyderabad, Delhi, Chennai and Mumbai on 08 September 2022