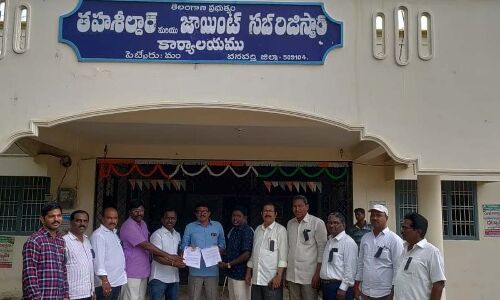 Wanaparthy: Devarakadra legislator Ala Venkateshwar Reddy on Thursday lauded the Chandrashekar Rao government for implementing so many welfare schemes, which were not being in force anywhere else in the country.

He along with ZP Vice Chairman Waman Goud, District Collector Sheikh Yasmin Bhasha distributed Aasara pension cards and CMRF cheques in Kotakota. Addressing the gathering, he said that no other state was giving pensions of Rs 2,016 and Rs 3,016 as in Telangana. He informed that 47,000 new pensions had been approved in Devarakadra constituency so far, and 1,075 pensions distributed in Kothakota mandal and 828 in Madanapuram mandal.

While there are already 36 lakh pensioners in the state, 10 lakh new pensions had been granted afresh by the Chief Minister. CM KCR and Minister KTR granted funds for the development of Devarakadra constituency which would further give impetus to the development. The MLA informed that Rs 7,300 crore works were approved of and school development works would be taken up in three phases. The MLA pointed out that in the past, only if one pensioner died would anybody receive a new pension, but now the TRS government was ready to grant pensions to all the eligible.

District Collector Sheikh Yasmin Bhasha said there were 62,000 pensionsers in the district and now 16,023 pensions were newly approved. He said that recently the central team studied the welfare schemes in the state and conducted a survey about the distribution of pensions. He called upon whoever missed out on the pensions earlier to apply again. Municipal Chairman Sukeshini Vishweshwar, JDPTC Krishnaiah, MPP Padmavathamma, CDC Chairman Chennakeshavareddy, Rythu Samiti Presidents Konda Reddy, Councilors, MPTCs, Sarpanchs, Single Window Chairmen and others participated in the programme.