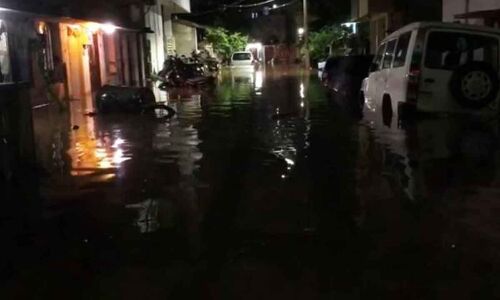 On Tuesday, September 6, two women died in Salem as a result of rainwater entering their homes during the torrential downpours that are lashing portions of Tamil Nadu. At Yercaud Four Road in Salem, Palaniammal (80) and Rukmani (70) were asleep in their respective homes when the water entered and they were unable to be rescued in time.

According to officials, while conducting rescue operations in the region, fire and rescue service members discovered their remains. Rainwater typically travels through Salem before entering the Thirumanaimuthur river.
However, this year, flooding and water affected a number of homes. Additionally, residents near the Cauvery River’s banks have been urged to leave low-lying areas and move to safer areas due to the anticipated rise in the discharge of excess water from Stanley Reservoir, according to Public Works Department officials on Tuesday.
The PWD planned to release 1.20 lakh cusecs of water from 16 sluice gates on Tuesday after the inflow into the reservoir increased from 65,000 cusecs to 80,000 cusecs on Monday night.
As debris from a landslide that occurred in the area on Monday is still being cleared, Nilgiris Mountain Rail (NMR) services between Udhagamandalam and Mettupalayam were suspended for a second day on Tuesday. According to railway sources, the railroads pulled back the train with 140 people to Mettupalayam on Monday after getting news about the significant landslide that occurred on the track between Kallar and Hillgrove stations on Sunday.
Tourists were disappointed when the railways suspended the NMR trains since track maintenance work is still ongoing. According to them, the services won’t restart until the debris has been removed.
previous post

Kerala Intends To Collaborate With NGO That Made Goa Rabies-Free