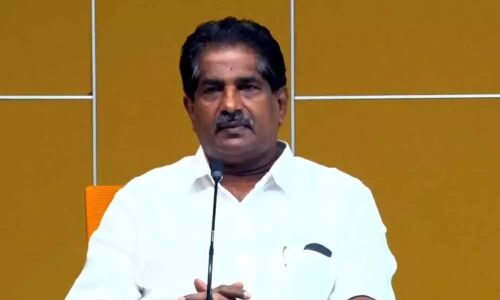 Vijayawada: The MLC and senior TDP leader Paruchuri Ashok Babu on Tuesday asked the state government as to why salaries of the government employees have not been paid till 13th of this month though the ruling party leaders claim that the financial condition of the state is very healthy and comfortable.

Talking to media persons at the party headquarters here, Ashok Babu, who was former president of APNGOs Association, questioned the government why the situation has come to such a pass that the employees are forced to stage dharnas in front of the district collectorates demanding salaries. “One can easily imagine the financial condition of the state as employees salaries have not been paid yet,” he remarked.

Observing that the state is now passing the 1959 situation wherein the employees could not get their salaries on time, Ashok Babu said that the ruling party can’t claim that the salaries of 13 lakh employees are paid on first of every month. He is of the opinion that Chief Minister Y S Jagan Mohan Reddy, could not pay the salaries as the state failed to get loans and alleged that the ruling party is adopting a vengeful attitude towards its own employees.

Why should the employees suffer for the benefit of the advisors and volunteers, he asked and said that even the retirement benefits amounting to Rs 2,200 crore too were not paid yet.

The situation is so bad that even the insurance premium is not paid till now, he added.

The Jagan government has kept on hold a whopping Rs 27.150 crore which is due to the employees, including the DA arrears for the contract, outsourced and regular employees, the MLC said adding that the government quota of Rs 800 crore under the Contributory Pension Scheme (CPS) has also not been paid.

We Founder Circle plans to invest in 10 local startups

Chandrababu visits Vijayarai in Eluru, says the YSRCP govt has failed in all aspects