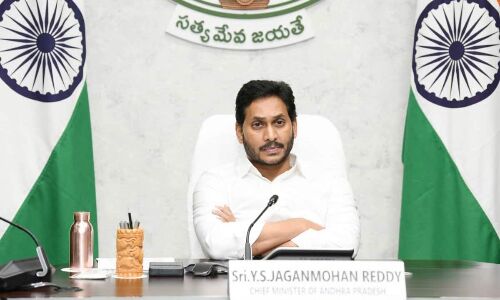 Nellore: The two barranges, Sangam and Nellore, inaugurated by Chief Minister YS Jagan Mohan Reddy on Tuesday would give a fresh lease of life to the Penna river canal system. The inauguration turned the decades-old dream of the people of Nellore district into reality. The barrages were built at a cost of Rs 326 crore and would stabilise an ayacut of about 4.85 lakh acre.

In the 1880s, the then British rulers built an anicut each at Nellore and Sangam to meet the irrigational needs as well as drinking water supply to several mandals in Nellore district besides Nellore town. But the two structures outlived their utility, leaving the people longing for new barrages along with carriageways.

In 2008, the then Chief Minister Y S Rajasekhara Reddy launched the two new barrage works but they progressed at a slow pace. The current government, headed by his son Y S Jagan Mohan Reddy, completed the projects. The Sangam Barrage has now been named after former minister Mekapati Goutam Reddy who died of a heart attack in February this year. Sangam Barrage has an ayacut of 3.85 lakh acre under it, including 2.47 lakh acre under the Penna Delta. The 1,195-metre Sangam Barrage has 79 crest gates and six scour sluice vents.

The two-way road on the barrage would facilitate smooth flow of traffic between Sangam and Podalakuru mandals. The banks of the river, running to a length of about 7 km, have also been strengthened as part of the project, according to officials of the State Water Resources Department. Two regulators have been built on the Kanigiri-Kavali and Kanupuru canals to ensure effective water supply to the ayacut. The Nellore Barrage is built with 43 spillway gates and eight scour vents. It has the capacity to hold 0.45 thousand million cubic feet of water. The barrage has a 7.5-m carriageway for traffic flow. The Nellore Barrage has about 99,000 acre under its command while it is also the source of drinking water for citizens of Nellore city and 77 surrounding villages.

T-Hub partners with SucSeed for investments