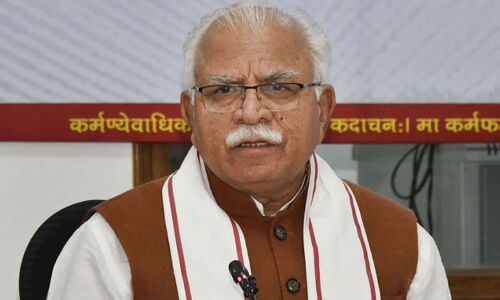 Chandigarh: Haryana Chief Minister while addressing a gathering at the Jan Samvad programme in Sonipat today said that Corruption will not be tolerated at any cost. He said that the State Government is continuously taking strict action against the corrupt.

CM Manohar Lal Khattar directed officials and employees that the problems of the public should be resolved immediately, and no laxity will be tolerated.

In the Jan Samvad programme, the Chief Minister along with the officials of his top administrative wing heard 400 complaints and gave directions for necessary action. During this, Sh. Manohar Lal also suspended an assistant posted in the ADC office with immediate effect after he received a written complaint against the said assistant. He further said that during the suspension period the assistant will report to the CMO office in Chandigarh.

During the programme, complaints regarding some builders were also raised before the Chief Minister. In one such complaint regarding the issue of possession of 700 multi-storey flats without obtaining NOC, the Chief Minister directed District Town Planner (DTP), Sonipat to resolve the issue within 7 days and take necessary action against the builder.

CM further directed the DTP to take the strictest action against the builders in other complaints as well. He said that it should be ensured that the general public does not face any problems due to the builders.

The process of making BPL cards will start on January 1, camps will also be held for PPP

The Chief Minister said that the work of making BPL cards will be resumed from January 1. Along with this, camps will be organized to remove the errors of Parivar Pehchan Patra (PPP) and to create new PPPs. Camps will be organized at different places across the state on December 10, 11, 15, 16 and 17 for PPP.

Chiranjeevi or Pawan Kalyan can become CM only with Congress support