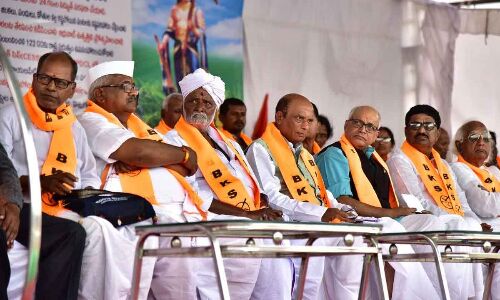 Mishra said all crops grown by farmers should be procured at a profitable price. “Chief Minister K Chandrashekar Rao has love for farmers of Punjab, Haryana and other States, but not for those from Telangana. Except for his family rule, the CM is against State farmers. He said the State government was making farmers lose by deciding wastage of 10 kg/quintal paddy.

To bring pressure on the Centre to increase funds under the Kisan Samman Nidhi and remove GST on input subsidy, farmers would take up ‘Kisan Garjana’ public meeting at Ramlila Maidan in Delhi on December 19.

Prominent farmer leader and former State president Paryada Anji Reddy said farmers who grow vegetables do not have same income as those who sell vegetables. “Lives of farmers were getting difficult; they were selling their farm lands. KCR who did not waive of farmers’ loans, was imposing a debt of Rs 1 lakh even on a new born child”, he alleged. He called upon farmers to elect those who work for them, adding that they can solve their issues only if united.

National BKS secretary K Sai Reddy said tha sangh was not affiliated to any party; it works to solve farmers’ problems. He alleged that the TRS government was not looking at State problems.

Kharge calls for ‘top to bottom’ accountability in Congress