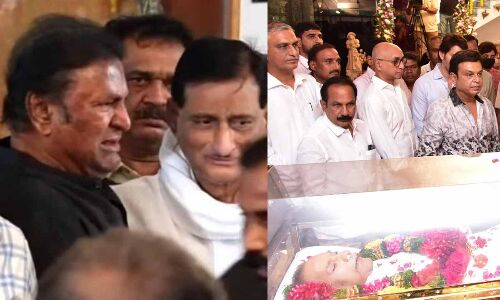 Hyderabad: Several celebrities, actors, actresses, politicians have visited the veteran actor’s house to pay their last respects to Superstar Krishna who passed away this morning at the hospital. Actors such as Chiranjeevi, Pawan Kalyan, Jr NTR, Allu Arjun, Daggubati Venkatesh, Ram Charan and others visited the residence of the late actor. Senior actor Mohan Babu too paid his last respects to late Krishna but broke down as soon as he saw the mortal remains of the late actor. He was inconsolable for sometime.

Later, addressing the media, he said that Krishna has helped him when he was in a critical stage of his career. Mohan Babu recalled that he had actor alongside Krishna in more than 70 movies and also worked as assistant director to the latter.

Similarly politicians such as KTR, Harish Rao, CM KCR, TDP chief Nara Chandrababu Naidu and others too have paid their last respects to the actor.

YS Sharimala drives car to Pragati Bhavan, lifted by crane as she is inside