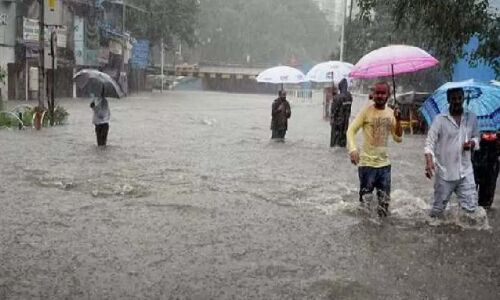 The average rainfall of Nirmal district was measured to be 84.5 mm. Laxmanachanda mandal had the highest rainfall of 141 mm, followed by Mamada mandal which experienced 124 mm of rainfall. Kubeer, Sarangapur, Pembi, Khanapur, Mudhole, Dilawarpur, Nirmal, Basar Kaddampeddur and Nirmal Rural mandals recorded somewhere between 70 mm and 114 mm of rainfall.

Adilabad district’s average rainfall was gauged to be 80.5 mm. Neradigonda mandal saw the highest rainfall of 124 mm, while Bazarhatnoor, Boath, Ichoda and Sirikonda mandal recorded over 100 mm of rainfall. The actual rainfall of the district was 1,428 mm as against the normal rainfall of 941 mm from June 1 to September 12, suggesting an excess of 52 percent.

A flooding stream overflew a low-level bridge hitting transportation between Madapur and Jafrapur villages in Soan mandal of Nirmal district. Pethapenkur village in Kuntala mandal was isolated with a stream swelling due to heavy rains in upstream areas. Several remote villages in Nirmal district remained disconnected from the mainstream, as per reports reaching here. Godavari river swollen at temple town Basar.

Meanwhile, people dwelling in few interior parts of Adilabad district bore the brunt of the rains that affected connectivity to their habitations. Farmers said that the standing cotton, soya and red gram crops were damaged due to the downpours. They requested the authorities concerned to carry out surveys to assess the crop damage and to extend compensation.

Petrol and diesel prices today in Hyderabad, Delhi, Chennai and Mumbai on 12 September 2022