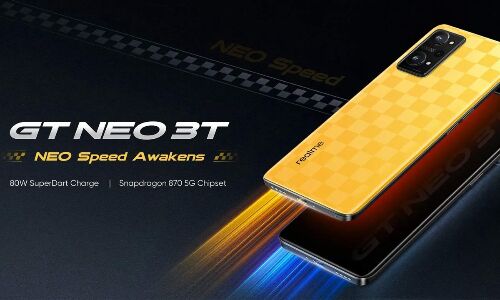 Realme is set to launch its Realme GT NEO 3T mid-range segment smartphone tomorrow, September 16, at 12:30 p.m. in India. It is poised to “democratize” fast charging technology in this segment, providing 80W SuperDart charging technology support at an affordable price. Realme claims that the GT NEO 3T can charge 50 per cent in just 12 minutes. Just before the launch, Realme announced a huge discount offer of up to Rs. 7000 on the smartphone, which is touted as the most affordable 80W charging smartphone with a Snapdragon 870 chipset. All you need to know about the new Realme GT NEO 3T.

The company has already revealed the highlights of the Realme GT Neo 3T, the 80W fast charging technology. It will be powered by the Snapdragon 870 5G chipset with up to 8GB of LPDDR4x RAM, which is expandable up to 5GB. It will feature a racing flag design inspired by motor sports.

It is also expected to have a 6.62-inch screen confirmed to be an AMOLED E4 display with a Full HD+ resolution and a maximum refresh rate of 120Hz. The screen will also have a maximum brightness of 1300 nits and support HDR 10+ content.

Its earlier launch in Indonesia suggests that the GT Neo 3T will house a 5000mAh battery. Realme confirmed that it features a triple camera setup with a 64MP AI as the primary camera. It is expected to be paired with an 8MP ultra-wide camera and a 2MP macro camera. Up front, it will feature a 16MP wide-angle selfie camera.

Realme GT NEO 3T was launched in early July with a starting price of IDR 5,499,000 in Indonesia. This roughly costs Rs. 30,000 for Realme GT NEO 3T. It will be available exclusively on Flipkart.